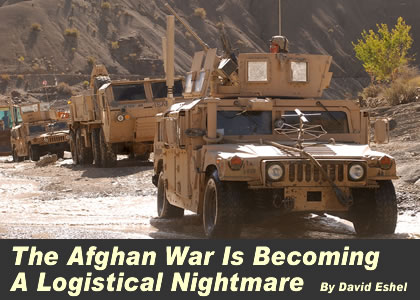 While winning the war in Afghanistan seems, under the circumstances, mere wishful aspirations, even keeping the deployed troops supplied could soon become a logistical nightmare. The land supply route supporting ISAF through Pakistan is already unreliable, forcing the coalition to search for safer alternatives. Seeking replacement to Manas airbase is another top priority that US military leaders have to solve in their logistical support dilemma.

The military reality in Afghanistan is that the occupation force has been unable to suppress an insurgency that has significant popular support. Even with the extra 17,000 U.S. personnel being sent by the new US administration, there will still be less than 90,000 US and NATO troops operating as part of the International Security Assistance Forces (ISAF) forces and barely 80,000 Afghan government personnel operating in the country. Given the size, geography and population of the country, military analysts estimate that a force of upward of 500,000 would be needed.

US president Barack Obama has admitted the US is not winning its war in Afghanistan. Asked in an interview with The New York Times if the US was winning in Afghanistan, Mr. Obama said flatly while adding: “Our troops are doing an extraordinary job in a very difficult situation… But you’ve seen conditions deteriorate over the last couple of years. The Taliban is bolder than it was. I think … in the southern regions of the country, you’re seeing them attack in ways that we have not seen previously.” The situation inside Pakistan is also deteriorating sharply. Only recently the Pakistani Taliban has formed a new alliance under the aegis of theShura-e-Ittihad-ul-Mujahideen (SIM), or Council of the United Holy Warriors. This alliance could spread and increase cross-border activities against US and NATO inside Afghanistan.

In the tribal region of Pakistan, operations involving over 100,000 Pakistani troops have failed to break the grip of Taliban, close down the safe havens used by Afghan insurgents or stem their cross-border movements. In Afghanistan and the tribal regions of Pakistan, there is no obvious reason for the Taliban or Hezb-e-Islami to bow to the occupation or accept the US-backed government, as occurred in Iraq. While they have suffered large casualties at the hands of the far better equipped coalition forces, their strategic position is far stronger now than at any time. The former US Administration has failed for more than half a decade to deploy the necessary resources in the field and the people necessary to use them. The sober fact is that the US and NATO are losing the war against Taliban since 2004.

Recent political developments inside Pakistan have not made these easier. Military analysts fear that Washington is losing its grip on developments in that volatile region. Beside their thrust to reverse the crumbling situation, US military officials are mosty concerned over supply lines into Afghanistan, which even led to suggestions that China and Iran be asked to assist. Significantly, US Secretary of State Hillary Clinton has invited Iran to take part in an upcoming summit on Afghanistan. There are clear signs that the new administration is seeking new strategy to solve the deteriorating situation in the seven year long Afghanistan fiasco, but it seems that their main concern will be how to safeguards a reliable supply line first.

While winning the war in Afghanistan seems, under the circumstances, mere wishful aspirations, even keeping the deployed troops supplied could soon become a logistical nightmare. The land supply route supporting ISAF through Pakistan is already unreliable, forcing the coalition to search for safer alternatives. Seeking replacement to Manas airbase is another top priority that US military leaders have to solve in their logistical support dilemma.

Being a landlocked country without any access to riverlines or seaports, all military logistic support to supply troops deployed in Afghanistan has to be made overland or by air. About 75 per cent of these supplies and equipment are shipped to the Pakistani port of Karachi, from where they are transported over land through treacherous 1,200-mile land journey to Kabul via the notorious Khyber pass. As invaders throughout history have learned, closing the Khyber Pass linking Pakistan and Afghanistan causes a logistic nightmare for even the largest army. In the currentconflict this historic bottleneck has become a hotbed of Taliban activity, attempting to close this vital supply line. An alternative route leading from Karachi to the Afghan city of Kandahar through the northwestern Pakistan town of Chaman, has also come under Guerilla attack recently. The number of attacks on supply convoys is a closely kept military secret, but they were lately occurring almost daily. Last year 42 oil tankers were destroyed in a single attack. Local drivers are paid high wages to risk their lives, to go over the treacherous winding mountain roads over the 3,500 ft Khyber Pass and many abandon their vehicles, trying to survive.

US supplies passing through Pakistan are pilfered by motley groups of Taliban militants, petty traders and even plain thieves. The US Army is getting burgled in broad daylight and can do very little about it. The Peshawar bazaar is doing a roaring business hawking stolen US military ware. US Army and Marines Corps uniforms and equipment are openly displayed for sale. The Taliban’s tactics are similar to those used by Mujahideen guerrillas in the 1980s that crippled the Soviet Army by attacking supply convoys.

The land route from Karachi over the Khyber pass may not be the only alternative for delivering military supplies inland. Afghanistan can be accessed from the northwest, but that route is much longer and would require traveling through Russia’s sphere of influence. Moreover even if this problem could be solved through political negotiations- which have a price, supplies would face another obstacle going south towards the combat zone: the notorious Hindu Kush mountain range, which has haunted Soviet military logistics in their Afghanistan war thirty years ago.

Located high in the Hindu Kush Mountains at an altitude of 11,100 feet, the mile and a half long Salang Tunnel – one of the highest in the world- that goes through the pass, is a vital artery that connects the north and the south of the country. But using this as a main supply route could become extremely dangerous. Beside insurgent attacks, frequent snow avalanches are blocking the tunnel and its access roads, creating dangerous traffic jams at both ends, posing lucrative targets for attacking guerillas. Furthermore, fires from exploding fuel tankers have killed many people, the worst occurring in 1982, when over 2,000 Afghans and Russian soldiers were trapped in the blazing inferno. The nearest bypass around the tunnel is through the Shibar pass, situated along the watershed between Central Asia and the Indian Subcontinent, but road conditions are bad and totally unfit for massive supply convoys. Furtehrmore, security in Pakistan’s northwest is also deteriorating rapidly; the Taliban’s eastward march has created fears in the country that large sections of the North-South mountain region, could be lost to the Pashtun jihadists within the next few months.

According to the new US administration’s strategic outlook, additional 30,000 troops should be deployed in Afghanistan. To implement such a plan, improving the existing logistic support is imperative. In fact, based on the present logistical infrastructure, any U.S. planned expansion of the war in Afghanistan is virtually impossible without opening the supply route through Russian territory.

Just to study the routes that such a US resupply might take, could make any military logistics expert suffer from constant insomnia! Assuming that the US would use a German Port as a main staging area, considering the route through Russia- via Moscow- southern Kazakhstan- Uzbekistan, by rail, not mentioning the still deteriorating state of Russian decrepit railways or different rail gauges en-route could become highly questionable for a dependable logistic support line. Moreover, once arriving in the region, following a reshipment from rail to trucks, these would have to cross the Amu Darya River on the way through the high-risk Salang tunnel route to Kabul. There may be alternative routes via the Black Sea over the Caspian into Turkmenistan, but these would require preventing Russian interference over this highly sensitive region.

There is, of course a theoretical (and tempting) alternative to the Karachi-Peshawar-Khyber-Kabul supply line that goes through the massive temporary autonomous zone on Pakistan’s northern border. That route is through the Iranian port of Chah Bahar on the Persian Gulf and goes through the western Afghan city of Herat. It then connects to the new Afghan Ring Highway which goes through all the major cities in Afghanistan. This quite dubious alternative might be safer than most, but will no doubt raise some eyebrows in the region. But some still optimistic analysts hope that Obama will explore this much shorter path through Iran, with an eye toward renewing the two countries’ sense of shared interests. In fact, it might even work at a price. Iran has a degree of self-interest in its next-door neighbor that distant Russia lacks.

Iran’s hostility toward the Taliban predates Sept. 11, with the Taliban’s interpretation of Islam which holds that the Shiite Muslims who dominate Iran are heretics. Iranians are also concerned about the boom in opium poppy cultivation that has swept Afghanistan in the aftermath of the U.S. invasion. Neither country wants to see a resurgence of the Taliban in Afghanistan.

If indeed Washington is so desperate over the logistic situation in Afghanistan and with the Russians led by Putin fully aware of President Obama’s plight, then a few, still naive politicians somewhere, may even recommend such a move to the fledgling President. Then not only in Tel Aviv will the political earth shake under such a short-sighted decision!