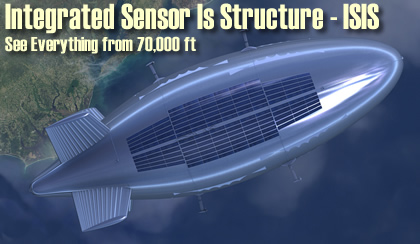 Within four years Lockheed Martin, with team member Raytheon will fly a stratospheric airship of unprecedented proportions, carrying an integral radar sensor that could detect small military valuable targets from a distance hundreds of kilometers away. Under a recently awarded $400 million Defense Advanced Research Projects Agency (DARPA) program, the “Integrated Sensor Is Structure” (ISIS) airship program is promising to revolutionize persistent, theater-wide intelligence, surveillance and reconnaissance (ISR). It will demonstrate battlefield surveillance, tracking and fire-control, and enable engagement of hundreds of time-critical air and ground targets simultaneously in both urban and rural environments, provided by a persistent, maintenance free satellite-like system.

“This is an extremely advanced machine that represents a dramatically different approach to persistent real-time intelligence” said Eric Hofstatter, Lockheed Martin ISIS program manager adding that the new platform required the development of high energy density power systems, an extremely lightweight radar solution and an advanced flexible composite material were necessary to make a stratospheric airship like ISIS possible. The current third phase of the program contracts Lockheed Martin to build the 1/3 scale airship featuring Raytheon’s new, low-power density radar. In an operational system, these radars would be approximately 6,000 square meters in size, forming an extremely large radar aperture, and would be embedded into the structure of the airship, which would cruise at altitudes of about 70,000 ft above the earth, staying on station for years.

The program will culminate in a three month flight demonstration scheduled for FY 2013. The autonomous flight test system will operate on station for 90 days, proving several key technologies with an anticipated total demonstration of one year. “The operational goal for ISIS is to look for airborne and ground-based targets and to communicate directly with the battlefield from a single antenna for up to 10 years,” said Michael Wechsberg, director of radio frequency systems programs for Raytheon Space and Airborne Systems. A full scale, operational ISIS airship could become a reality by 2018.
The active, electronically scanned array (AESA) dual-band radar developed by Raytheon and employed in the scaled down version of the ISIS is an integral component of the airship structural design. It comprises two arrays of lightweight, digital transmitter/receivers arrays, transmitting from within the airship. The two arrays will comprise a 100 square meter X-band and 600 square meter UHF band arrays.

ccording to DARPA, these sizes will be large enough to validate manufacturing and calibration for the objective system and will provide an early glimpse of the air and ground target tracking performance possible with an operational system. When fully scaled up into an operational airship, ISIS sensors would be able to detect and track extremely small cruise missiles and unmanned aerial vehicles at distances of 600 km. Man-sized targets, or vehicles under foliage could be spotted at a range of 300 km – capabilities not possible from existing or planned air or space assets.

This phenomenal performance centers on the physics of radar. As the radar aperture grows larger, the tracking performance of the radar system increases exponentially. DARPA’s ISIS program takes advantage of the large amount of space available on a stratospheric airship to enable a very large radar aperture and provide a revolutionary level of performance. In addition, the program envisions operating the stratospheric airship using a satellite-like logistics model where the airship will be launched and operate autonomously.