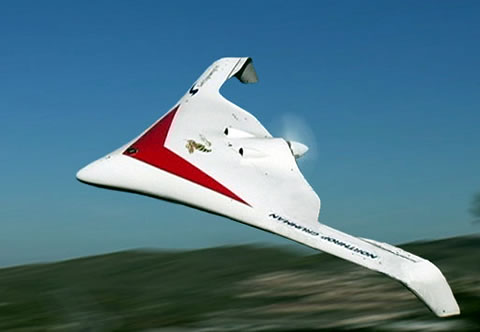 Swift Engineering teamed with the Raytheon Company, pursuing the STUAS/Teir II competition with its Killer Bee UAS platform. The vehicle has a 164 lbs maximum gross takeoff weight. It has a 10-foot wingspan, delta-shaped blended wing body, carrying a 66 lbs payload including sensors, mission payload and fuel. An 8 HP engine is accelerating the Killer Bee onto a maximum speed or 105 knots.

Over the target area it will slow to a loitering speed of 55 kt, just above the 45 stall speed. At that speed, typical endurance is about 15 hours. The operating ceiling surpasses 10,000 ft. Typical mission payload (excluding fuel) is 30 lbs. The Killer Bee deploys from a launcher system integrated into a trailer, and recovers by recovery net. The whole system fits inside two ISO 20’ containers for transportation and shipment, and can be transported inside an MV-22 or towed by a HMMWV. The STANAG 4586 level 5 compatible ground control system offers fully autonomous mission. The entire system is operated by a crew of two or three, depending on the mission configuration.

On April 27, 2009 Northrop Grumman announced it has acquired the KillerBee line of small unmanned air systems (UAS) from Swift Engineering. Under the new ownership the KillerBee will be renamed ‘Bat’. Northrop Grumman plans to offer these UAVs in different sizes, with wingspans ranging from 6.5 to 33.2 feet. Northrop Grumman announced that Swift Engineering will continue to work on design refinement, product line development, flight test support and manufacturing of the UAS line it acquired. Product development will be managed by Northrop Grumman’s Aerospace Systems sector. Since 2006 as the Swift was introduced, Swift has teamed with Northrop Grumman and Raytheon to pursue the U.S Navy and Marine Corps Small Tactical UAS (STUAS) / Tier II program which has been suspended in 2007. Northrop Grumman said it has licensed Raytheon to offer the Bat for STUAS and other programs. The company has not confirmed if it will also be competing separately for this program.