Troops fighting on the frontline will get better personal protection from this autumn, with the introduction of an improved helmet and body armour. The new armour system was unveiled at the MOD’s defence equipment show, called DVD, today.
Over 10,000 sets of the enhanced Mark 7 helmet and the Osprey Assault body armour have been ordered from companies across the UK, under initial contracts worth around £16m. The new helmet and body armour will provide excellent ballistic protection, whilst improving the comfort and fit of personnel on operations in Afghanistan.

Companies who will benefit from the contracts placed by the MOD are:

Minister for Defence Equipment and Support, Quentin Davies, said:
“The Osprey body armour that we issue to all troops on operations provides excellent personal protection, as recent stories of troops surviving due to their armour show.

“However, we can never be complacent and the new Osprey Assault body armour and Mark 7 helmet offer an improvement in the way that it these items fit and feel. The contracts that I am announcing today for this new personal protection systems demonstrate that we’re listening to what our troops need by continuously upgrading their equipment.”

The new helmet has the same protection as the current MK 6A but will improve the effectiveness of the soldier. A new harness keeps the helmet more stable on the head when Night Vision equipment is fitted to it. It is better integrated with new weapon sights, making it easier to use weapons in a variety of fighting positions.
The new Osprey Assault body armour has all the stopping power of the current Osprey but is closer fitting, less bulky and easier to move in.

Chief of Defence Materiel, General Sir Kevin O’Donoghue, who unveiled the new kit at MOD’s defence show DVD, added:
“Osprey is a proven world class system and is undoubtedly a success story in terms of providing better protection to our troops. It is specifically developed to meet our requirements using cutting edge materials and manufacturing technology. Osprey Assault is a development of this success that allows us to ensure our troops are getting the best kit for the job they are doing.

“Specifically the troops will be issued with a new ballistic plate that is much thinner, considerably reducing their bulk and burden and improving their endurance. There will also be a new body armour cover to hold this plate and the soft fragmentation armour. This has been designed for an improved fit, based on user feedback and includes a new system for carrying ammunition, first aid equipment and other vital kit.”

The new body armour and helmet will be delivered to troops deploying to Afghanistan this Autumn. 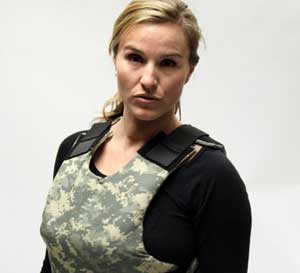