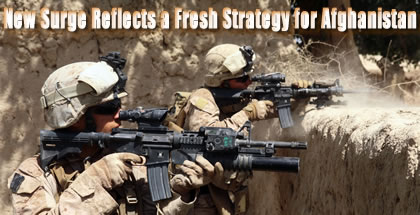 Over 4,000 U.S. Marines of the 5th Marine Expeditionary Brigade Afghanistan and 650 Afghan security forces supported by Marine Aircraft Group 40 and Task Force Pegasus of the 82nd Airborne Division Combat Aviation Brigade, providing air support, continue Operation Khanjar (“dagger” in Pashtu) launched in Southern Afghanistan’s Helmand province on Thursday July 2nd, 2009. Operating in the area of Garmsir and Nawa districts, the attack was the biggest operation in Afghanistan since the Soviet occupation. As part of their task to secure forward operating bases in the region, forces of the Marine Expeditionary Brigade Afghanistan have moved into cities and towns along the Helmand River, digging in for the long haul. Officials in Kabul said the Taliban have not directly confronted the massive operation, but rather are melting into the populace. “In the next few days the enemy will observe us to see what we are doing. Then they will come back with a vengeance” Marine brigade commander, Brig. Gen. Larry Nicholson said.

East and North of the U.S. forces, about 3,000 British, Danish, Estonian and Afghan soldiers from Task Force Helmand are taking part in the Operation Panchai Palang (Panther’s Claw), north of Lashkar Gah, the provincial capital. The US marines – part of an American surge of new troops into southern Afghanistan – relieved the British forces from controlling the majority of the area. The British forces are now responsible mainly for the central area around Lashkar Gah, and part of the north. Similar operations are under way in other parts the country near Kandahar.

By Friday, July 3rd, the lead US unit, 2/8 Infantry Battalion US Marine Corps, had advanced as far as Toshtay, 16 miles south of the town of Garmsir, but resistance was proving to be stronger than expected. The Marines are operating as far south as the vicinity of Khan Neshin, the capital of Rig district in the region of the Helmand River valley known as “The Fishhook.” At the same time, the British Light Dragoons Battle Group is still in action north of the provincial capital Lashkar Gah. As part of the offensive to clear and hold Taliban territory, men of the 1st Welsh Guards spent 10 days capturing 13 crossings along the Shyamalan canal, and it was during those operations that they lost their commanding officer Lieutenant Colonel Rupert Thornelow.

The goal of the NATO-led International Security Assistance Force (ISAF) is to institute a “clear, hold, build” counterinsurgency strategy in the region, taking advantage of the introduction of fresh U.S. forces, the operation is part of an overall NATO effort in to extend security to the Afghan people in southern Afghanistan. Once security is established, civil affairs personnel and other nongovernmental organizations and agencies will begin establishing programs aimed at building long-term governance and development throughout the Helmand River valley.

“What makes Operation Khanjar different from those that have occurred before is the massive size of the force introduced, the speed at which it will insert, and the fact that where we go we will stay, and where we stay, we will hold, build and work toward transition of all security responsibilities to Afghan forces,” said Brig. Nicholson. One of the goals of the recent military operations is to secure a stable environment in Afghanistan, to support the democratic elections scheduled in two months.

The new tactical directive restricting combat units from using firepower to the minimum is designed to slash civilian casualties from airstrikes but also expose troops to increasing threat once the Taliban realize the new tactics and its limitations. General McChrystal has ordered troops to avoid airstrikes unless they risk being overrun or they are sure there are no civilians nearby. Sofar, the limited skirmishes with the Taliban were limited to direct fire with officers refraining from using mortars, artillery or aircraft bombs during their movement south. The marines’ mission is to secure the villages along a stretch of river more than 55 miles long in the heart of poppy-growing territory. These moves will also block supply lines providing the main routes of Opium export and supporting Taliban fighters from Pakistan.

Adhering to classical insurgency tactics, the Taliban ‘melted away’ within the population and into the desert hills as they expected the coalition movements. As the Marines dismounted from their MRAPs, they hardly encountered opposition. The commander of the 5th MEB, Brigadier-General Larry Nicholson described part of the regions as ‘too quiet’. Adding: “In the next few days the enemy will observe us to see what we are doing. Then they will come back with a vengeance.” But some observers believe that too few US troops have been sent to Afghanistan to secure troubled areas. John Nagl, a counterinsurgency expert who was appointed last week to the defense policy board at the Pentagon, estimates that Afghanistan could present a more difficult theater that Iraq. He assessed that Afghanistan needs a national army of 250,000 to enable the allies to pull out. However, at present the Afghan national army has about 92,000 troops, and 83,000 men in the police force. Therefore, more US troops are needed to fill the gap, as they are gradually being diverted from Iraq.