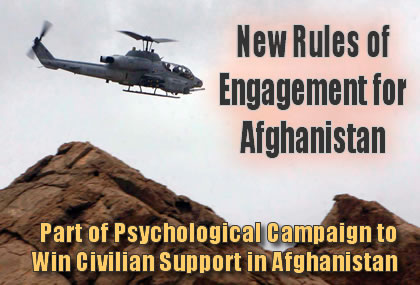 The conduct of the new campaign in the south of Afghanistan follows new tactical guidance, recently published by ISAF and U.S. Forces commander in Afghanistan, Army Gen. Stanley A. McChrystal, in re-emphasizing coalition forces serving in Afghanistan with the importance of preventing civilian casualties. These directives were published after a series of attacks caused significant casualties among non-combatant Afghans, causing civilians rage against Coalition forces. The new directives and operations are aiming to turn the tide, ‘win the hearts and minds’ of Afghan civilians and convince them that ISAF and the foreign forces are there to help, if only they are given a fair chance to do that.

“Working together with our Afghan partners, we can overcome the enemy’s influence and give the Afghan people what they deserve: a country at peace for the first time in three decades, foundations of good governance and economic development,” General McChrystal said.

The new directive takes the new strategy for Afghanistan as its base, recognizing that ISAF and Afghan forces may win tactical victories against the Taliban, but lose the war. The new approach will change the rules of engagement for close-air support. Afghan houses and properties will be searched by local security forces, rather than coalition troops, expected to be more attentive to Afghan cultural and religious sensitivities. “No ISAF forces will enter or fire upon, or fire into a mosque or any religious or historical site, except in self-defense,” McChrystal wrote in the directive. “All searches and entries for any other reason will now be conducted by the Afghan National Security Forces.”

Taliban fighters commonly engage coalition forces from positions that expose Afghan civilians to counterfire from coalition forces. The Taliban cite such incidents to lead people to believe that a NATO-led force does not care for Afghan civilians. McChrystal’s tactical directive emphasizes ISAF mission to protect the people from the insurgents. “Like any insurgency, there is a struggle for the support and will of the population,” he wrote. “Gaining and maintaining that support must be our overriding operational imperative – and the ultimate objective of every action we take.” While the new directive is general, and does not prevent commanders from protecting the lives of their troops engaged in direct combat, Gen. McChrystal expects commanders at all levels to understand the directive and abide by it when planning and conducting operations. “Following this intent requires a cultural shift within our forces – and complete understanding at every level,” he wrote.

British Army (Ret.) Colonel Richard Kemp talks about the difficulties of fighting irregular warfare in civilian populated area, as reflected in the Israeli campaign in Gaza, 2009;