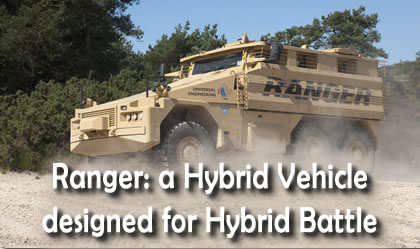 Universal Engineering launched the privately funded Project Ranger in June 2008 – developing a family of protected vehicles for use by military forces worldwide. The vehicle concept is unique, in that it has been designed from the crew outwards and offers the most advanced protection system available with an array of optional mission-enhancing systems, for commanders to choose from. The Ranger offers balanced yet uncompromised protection, mobility and payload carrying capability.

“Ranger represents the next generation of force protection, mobility and mission functionality.” Ranger project director John Scott said, “Ranger is a hybrid vehicle designed for today’s hybrid battle. Ranger has performed far and above our expectations. Its handling and ride characteristics are first class and it’s off road, cross country performance has exceeded even our optimistic predictions.” Scott added.

The protection system is designed to withstand anti-tank mines, and small arms, conforming to level 5 and 4 A/B, as defined by STANAG 4569, as well as protection counter-IED and shaped-charge threats. Internal spall liners are reducing the risk of internal damage, in case of shaped charge penetration. The vehicle design also provides significant protection against large explosive charges and mines. The Ranger design is fitted with a V shaped hull and floating capsule. Furthermore, the front end containing the powerpack module and rear wheel station are designed to blow clear of the vehicle, deflecting much of the blast effect off the protected capsule.

To withstand higher threats, the vehicle is fitted with universal mounts for add-on armor modules on the sides and underbelly. Certain base armor modules can be tuned, and add-on armor applied. The crew seats, used in the Ranger are designed to accommodate fully equipped soldiers, with combat webbing and helmets. They are suspended from above, and equipped with shock absorbers and foot rests to mitigate blast effects from an underneath explosion. On emergency the seats can be quickly removed for use as a stretcher. The Ranger uses an electronic architecture system developed by Selex Galileo and Indirect Vision System, providing the crew full situational awareness under all visibility conditions.

The 19 ton vehicle is designed as a ‘chassis-less’ platform, where the automotive elements are attached to the monocoque capsule or in separable modules (frontal elelemt). Capable of on-road and off-road mobility that matches or surpasses the British Improved Medium Mobility Load Carrier (IMMLC) all-terrain truck, carrying a payload of six tons (on the 6×6 and 8×8 versions). Powered by a 540 hp MAN diesel engine coupled to a 12 speed ASTronic gearbox driving the 6×6 all wheel drive, the 19 ton Ranger accelerates from 0 to 50 km/h in only seven seconds reaching top speed of 117km/h, on road. Utilizing rear steering it can turn on a 16 meter circle. Compared to IMMLC, the Ranger has a lower ground pressure, almost twice the power/weight ratio and 60% higher ground clearance, providing for much better off-road mobility. It can ford a water gap at 1.5 meter depth and wade a gap 1.5 meter wide, without preparation. It also has an adjustable height suspension system, an all-wheel drive with rear steering support, and runflat tires. The Ranger is equipped with a 200 Amp auxiliary power unit, providing for extended ‘silent watch’ and enabling the vehicle to use maximum engine power for mobility when required. Ranger is designed to be air transportable in a C-130, A400M and C-17.

Ranger is offered in three basic versions – the basic 4×4 variant, accommodating 4 or six soldiers plus commander and driver, and roof mounted weapon station – the short capsule 4×4 can be used for fart response, recce snatch as well as Light Protected Patrol Vehicle ( LPPV) missions. A larger 6×6 variant shown at the DVD 2010 event accommodates four passengers and is configured with a flatbed for load-carrying of up to six tons. The 6×6 has a slightly longer and higher hull with a nominal payload of 6 tons. An 8×8 pre-production Ranger was shown at the DVD show is capable of carrying a payload of 11 tons. These heavier vehicles are powered by a 540 Hp MAN diesel engine coupled to an automatic transmission and Horstman Defence Systems independent double-wishbone suspension for efficient off-road mobility. This 8×8 platform is offered in an extended version, with a larger armored capsule accommodating six passengers. The vehicles could be configured into armored ambulances and fire support platform.