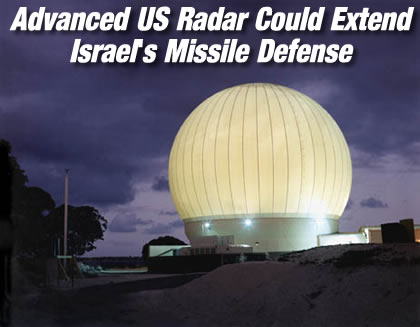 The early warning capability provided by US X-band radar that Israel has requested recently could extend the range of Israel’s Arrow II ballistic missile interceptors, enabling effective intercept above the atmosphere.

Nearly 70 members of Congress, including the top Democrat and Republican on the House of Representatives Armed Services Committee, sent a letter to President Bush urging him to offer a warning radar that is “fully integrated” with the emerging U.S. shield. Analysts believe that the idea behind this gesture is to encourage responsible elements in Israel to defer offensive measures against Iran’s nuclear infrastructure.

Known as the Forward-Based X-band Transportable (FBX-T) radar, the AN/TPY-2 is built by Raytheon, based on the ‘Ground Based Radar’ employed with the THAAD system. The FBX-T is designed as an air, ground and rail transportable, X-band, phased array radar that uses high-powered, electronically scanning pulsed beams, to track small objects in space at high resolution. The system has been described by U.S. officials as capable of tracking an object the size of a “baseball from about 2,900 miles (4,600 km) away”. The system is being developed in a spiral process. The current phase provides surveillance and search capabilities early in the target trajectory, and enables the early engagement of the threat. It also supports messaging and communication with the Ballistic Missile Defense Systems (BMDS) battle manager (C2BMC).

Performing autonomously, or as cued by other sensors, the FBX-T is optimized for its role as missile detection and tracking sensor. The radar will provide target detection, classification, discrimination, acquisition and tracking. It will plot the trajectory parameters for each threat missile, and pass it to the command and control system for use by the fire control systems, such as the Green Pine radar, acting as fire control system, midcourse and terminal sensors. Furthermore, the long range and wide area coverage provided by the new radar could cause Israel rethinking its sofar shelved, ‘boost phase intercept’ concept, by deploying forward positioned interceptors far from its borders and close to the enemy launching sites.

The new capability will improve both the Israeli missile defense capability, enhancing Israel’s existing Arrow II anti-missile defense, allowing it to engage Iranian Shehab-3 ballistic missiles, fired on Israeli targets at much greater distances. It will also provide an important element of the US missile defense network, providing ascent and mid-course coverage of missiles, launched from Iran, as well as the eastern Mediterranean. This would give a potentially targeted Israeli population at least five precious minutes to prepare for a first Iranian missile impact. The Arrow’s Green Pine radar operates at a lower frequency (L-Band) and therefore, offers lower resolution, While the radar can pick up a missile target as it ascend into space on its ballistic trajectory, its intercept is limited to a later phase of the trajectory, soon before or after it enters the atmosphere on its way to Israeli airspace, with lesser warning time made available in a surprise attack.

Four transportable forward deployed radars are currently planned. Two were produced by the end of 2007 and deployed to protect the United States’, friends and allies from Intercontinental Ballistic Missiles and medium range threats. It is not yet clear whether the system destined for Israel will be one of those four.

The US Ballistic Missile Defense System, is planning to deploy four forward based X-Band radars to enhance the US missile defense system, providing a ‘tripwire’ detecting missile attacks from ‘rough states’ soon after they are launched. Current space based sensors and large anti-ballistic missile radars provide launch indication and tracking of ballistic missiles, but are not designed to track medium range ballistic missiles in flight. In addition to Israel, other locations already considered for the radars are Japan, South Korea, and Czech Republic. A sea-based X-Band radar station has already been activated last year, off the Alaskan coast. Forward based radars, coupled with layered sensors, give the Ballistic Missile Defense System a continuous tracking and discrimination capability with more opportunities to engage the target, resulting in a greater probability for a successful intercept.

Iran’s growing ballistic missile capability is of great concern at the Pentagon. According to the Director, Missile Defense Agency Lt. Gen. Henry Obering, the US is concerned that extended range ballistic missile capability, already obtained by Iran is ‘much farther beyond anything that Iran would need in a regional conflict with Israel’, “a missile that is capable of even 1,300 or 1,500 kilometers, could encompass the entire Israeli country as well as – U.S. bases in the region.” General Obering noted. “We do not want to be in a situation where we’re facing a long-range missile threat, in which we don’t have protection against it.” According to Obering, part of this preparation, is the deployment of early warning sensors and interceptors in locations able to provide coverage and protection to those nations that would be vulnerable to long-range Iranian missiles. 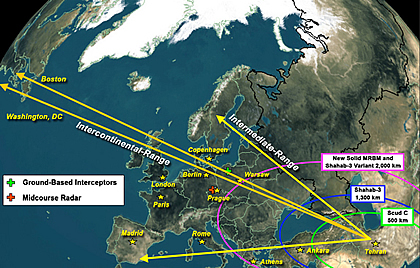