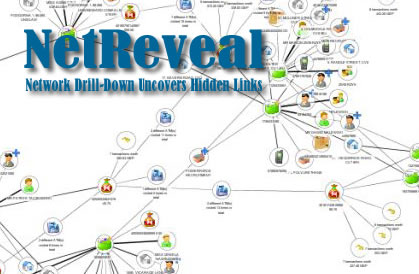 NetReveal services developed by BAE Systems’ Detica, provide automatic processing and access to huge volumes of information, suggesting association and links between objects of varying formats and origin. Enabling analysts to gain an insight and develop situational awareness and understanding in rapidly unfolding scenarios, intelligence agencies can process large volumes of inbound, multiple format intelligence, dynamically and automatically comparing it to a historic back drop of millions of data items and reports in search of hidden links.

Conventional text based intelligence processing systems that rely on manual association between structured data objects, for example, identifying members of a terrorist cell by linking calls from a suspect’s cellular phone records. According to BAE Systems, NetReveal can identify and highlight entities and links over multiple domains of unstructured data. For example – correlating between two groups of people who called a certain phone number and drove a specific car, the two sets are unassociated events involving people who are non suspects, but the correlation of communications link and access to the same vehicle hints on the existence of a ‘network’, triggering an alarm for further investigation. The system automatically generates such ‘networks of intelligence’ using free text, structured and unstructured data, correlated with geospatial and time dimension. Based on the ad-hoc analysis of historic and current data mined from all available sources, including human intelligence and open sources, this process dynamically suggests associations between entities, anomalies, unveiling associations and underlying trends that analysts have not been aware of before. Data processing that could have taken days in past methods can be performed within minutes.

The system was implemented by the Joint IED Defeat Organization (JEIDDO) in a new intelligence collection and analysis system aiming to uncover and target the operational, financial and social networks involved in IED deployment.