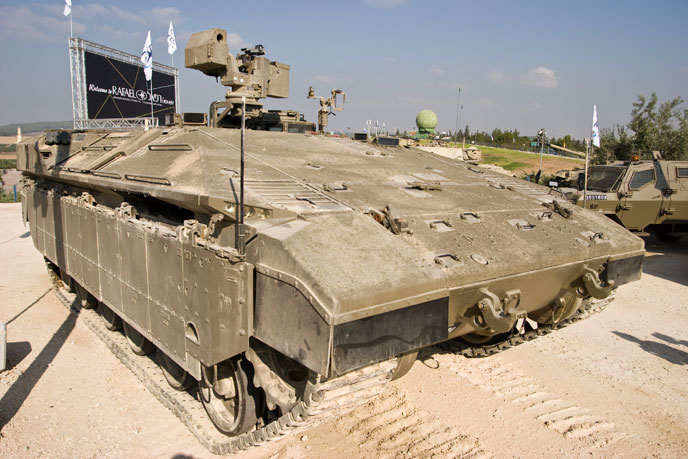 The 13th Infantry Battalion of the Golani Brigade was the first Israel Defense Forces (IDF) unit to convert from the T-55 based Achzarit armored infantry carrier to the new Infantry Combat Vehicle – the Namer. With the Merkava tank and new Namer ICV, the IDF is expanding the Merkava platform into a family of combat vehicles, to include a tactical support vehicle, armored MedEvac, an Armored Recovery Vehicle (ARV) and, potentially, future weapons carriers.

Namer is not a modified Merkava. It uses the basic design and components of the tank, but designed from baseline as an optimized infantry combat vehicle. The new vehicle represents a different concept in IDF armored vehicles – as for the first time the infantry is receiving a dedicated vehicle specially designed for their mission, rather than a modified tank. Despite the basic similarities, At a fully loaded combat weight of 60 tons, this vehicle is almost as heavy as a Merkava Mk 4 tank. This fact underlines the most important factor in the Namer design – its superior protection and mobility. 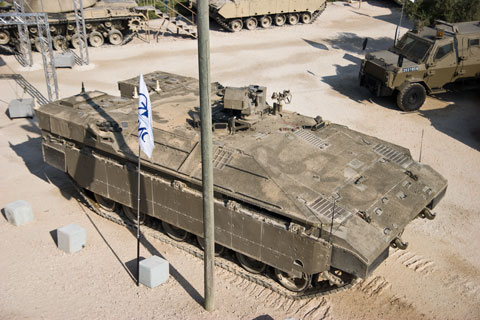 The Namer program is a major element in the IDF US$60 billion ‘Tefen 2012’ five-year modernization plan currently underway. Eventually, the IDF plans to field hundreds of Namer ICVs to equip its elite infantry brigades, providing the infantry with the level of protection and mobility matching and even exceeding those of the latest Merkava Mk 4 tanks. The Israel MOD is planning to produce the orders for the entire Namer production by 2012, pressing the local production capacity beyond the limits. To meet this ambitious goal Israel is considering moving material sourcing as well as final assembly to the USA. Among the manufacturers being considered are BAE Systems and Textron Systems. This plan is facing significant opposition within in Israel, as many fears its long term effect means the elimination of Israel’s armored vehicles production capability, which will also damage the country’s ability to rapidly reconstitute vehicles damaged in combat.

The Namer is equipped with a remotely operated weapon station, fitted with electro-optical observation and sighting systems, and ‘see-through armor’ optics providing the crew 360 degrees view around the vehicle. The vehicle is equipped with a 0.5″ heavy machine gun mounted on the weapon station; a secondary, manually operated 7.62mm machine gun and a 60mm mortar are also included. The rear access door which also acts as a ramp has a transparent firing port for a sniper, utilizing a design originally developed for the Merkava tank. Smoke dischargers are located on both sides of the vehicle. The vehicle is designed to receive the integrated Iron Fist Active Protection System (APS) currently under development at IMI.

The superior base armor and the availability of add-on armor modules provide the vehicle with a protection level unprecedented among contemporary armored fighting vehicles (AFV) and, in some areas, even exceeding that of the latest Merkava Mk4. Much of the armor modules are developed by IMI which was selected to produce the advanced armor suite for the Namer. This advanced armor provides balanced protection to the front, sides and roof. Internally, the seating arrangement enables good protection from blast effect, utilizing protected belly and ‘floating’ seats (not rigged to the floor). The forward mounted engine leaves room for a large rear access ramp, and provides a spacious internal configuration for the fighting compartment.

Spacious internal space is also a by product of the Samson remotely controlled weapon system (RCWS). The flat roof provides effective observation by the optronic sensors, even from closed hatches. The Namer utilizes an ergonomically designed driver’s compartment, similar to that of the Merkava tank, fitted with large vision blocks and electro-optical driver’s viewing devices enabling effective performance under all visibility conditions. Safety equipment includes blast-absorbing seats for the crew and an internal fire suppression system. At least four remotely controlled video cameras are used to provide the crew, driver and commander with unobstructed peripheral view. The new vehicles enables effective operation in “buttoned up” conditions over extended durations, offering spacious interiors, rapid access and dismounting of troops. The new vehicle utilizes much of the advanced command and control systems developed for the IDF ground forces digitization program (Zayad), the vehicle will be supporting the new Battle Management System for the dismounted Infantry, designed by Elbit Systems to support the dismounted ‘Integrated Advanced Soldier’ (IAS) system.

Currently configured as an infantry carrier, the Namer is actually the forerunner of a new family of heavily armored vehicles, designed to support the combined arms fists of IDF brigades. Among the versions envisioned are the armored infantry support vehicle, equipped with remotely operated turret mounting a 30mm automatic cannon and 7.62mm coax, two multi-purpose guided missiles, and 60mm mortar. This vehicle is typically equipped with two minipop stabilized multi-sensor payloads, enabling two operators (commander and gunner) to effectively employ ‘hunter killer’ combat techniques. The current design of the Namer is already prepared to carry the heavier weapon station, offering protected storage for weapons separated from the fighting compartment and strengthened roof able to carry the extra loads. Since the new installation will not penetrate the fighting compartment, the vehicle will retain its infantry carrying capability even with the new weapon kit.

Beyond the Merkava tank and Namer ICV, the Merkava family of vehicles also includes a tactical support vehicle, providing maintenance and support for the combat team. An armored ambulance is also being configured, replacing the vulnerable M-113. Preparations for both missions are already configured in the Namer design. For medical evacuation under fire, every Namer is being fitted with a collapsible stretcher carriage facilitating rapid and efficient battlefield medical evacuation. The IDF also plans to field a Namer designed as an Armored Recovery Vehicle (ARV), supporting Merkava and Namer formations. The Merkava based ARV will be able to tow a fully loaded Merkava tanks, augmenting or replacing the M88 ARVs.