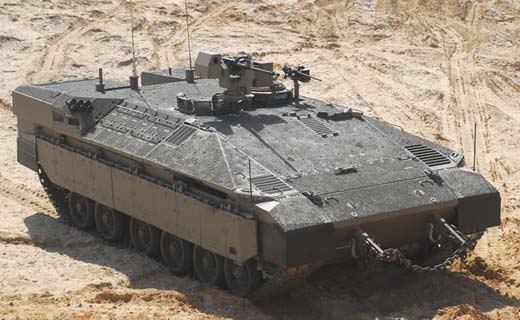 The Namer Infantry Combat Vehicle is expanding the Israeli Merkava into a family of vehicles. It also represents the latest version of the ‘heavily armored infantry combat vehicle’ – specially modified, highly protected personnel carriers, pioneered by the Israelis back in the 1960s. Beginning with few M-4 Sherman chassis, stripped of their turrets to become highly survivable mobile command posts for Israel’s armored divisions, the concept further developed in the 1980s, as turretless Centurion and T-55 tanks were modified into highly survivable patrol vehicles, combat engineer vehicles and armored infantry carriers. 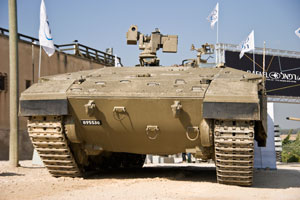 The Infantry Combat Vehicle (ICV) is not a new concept. In fact, Israel is 30 years behind the world in adopting the IFV. However, the Israeli design is not even close to what the world is used to see in an ICV. While modern militaries adopted the ICV (or Infantry Fighting Vehicle – IFV) in the 1980s – the U.S. Bradley, British Warrior, German Puma, French AMX-10P, Spanish Ascod, Swedish FV-90 are all IFVs – the Israeli Army resisted the idea of relying on compromise between a tank that lacks adequate protection, and an armor personnel carrier that cannot take a full squad. The Israelis could afford to wave of the IFV since their indigenous super-heavy Merkava tank could deliver most of the capabilities the IFV could, but do it bigger, stronger and tougher. Armed with a full-sized 120mm cannon, and spacious enough to carry an infantry team the Merkava provided the armor elements the integral infantry support they needed. For infantry mobility the Israelis opted for ‘hybrid’ design, modifying several hundreds T-55 hulls into protected infantry carriers known as Achzarit (Hebrew: ruthless). For more than 20 years these vehicles provided the protected mobility for the Israeli infantry, but could not measure up with the fast moving Merkava Mk 3 and 4 tanks.

The IDF ordnance corps, responsible for the Merkava production has been working on a Merkava based APC for over 10 years, but development was slow due to lack of funding and support from the MOD. In the early 2000s the IDF was keen to buy wheeled armored vehicles, and was considering the acquisition of the U.S. Stryker, German built Dingo 2 or indigenous designed Golan. 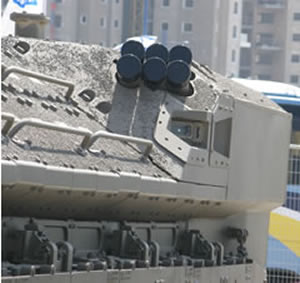 During the second Lebanon War of 2006 the Israelis bitterly learned several important lessons that have been forgotten in years of low intensity warfighting. They few infantrymen travelling in the back of the Merkava tank could not perform as effectively as a cohesive unit. Realizing the infantry need a vehicle dedicated for their mission, providing protection and mobility as good as the tank, but far beyond what the current vehicles could deliver. In 2007 it became clear that the only design that could meet the IDF requirement in time and on budget would be the Namer. It took two years to process the initial order through the MOD bureaucracy, but, by mid 2009 the first infantry company at the Golani elite infantry brigade was formally equipped with the new vehicle, replacing the Achzarit that was previously used by the brigade. Today, the Namer program is a major element in the IDF land forces’ five-year modernization plan. Eventually, the IDF plans to field hundreds of Namer ICVs, providing the infantry with the level of protection and mobility matching and even exceeding those of the latest Merkava Mk 4 tanks.