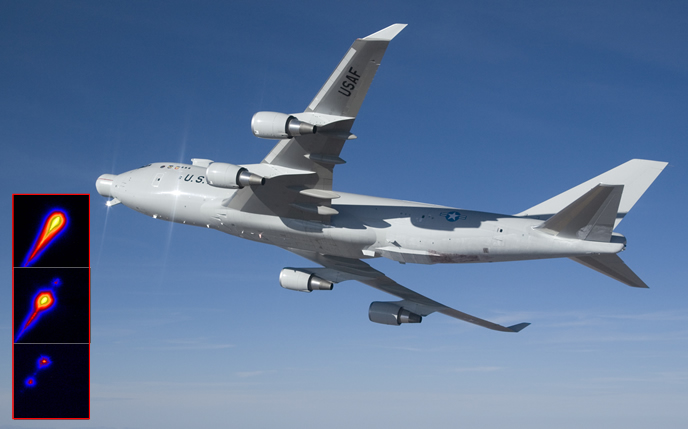 The Missile Defense Agency successfully achieved a major milestone in the missile defense program, demonstrating the airborne laser can effectively destroy ballistic missiles in flight. The recent test series marks the first time a laser weapon has engaged and destroyed an in-flight ballistic missile, and the first time that any system has accomplished it in the missile’s boost phase of flight. ALTB has the highest-energy laser ever fired from an aircraft, and is the most powerful mobile laser device in the world.

ALTB is ‘one of a kind’ aircraft, and, despite its potential, the program’s funding was reduced significantly last year, eliminating funding for follow-on aircraft and more testing, along with the Pentagon’s thrust toward sea-based missile defense. However, the successful results could get the program back on track. “We’ve been saying for some time that the Airborne Laser Testbed would be a pathfinder for directed energy and would expand options for policymakers and warfighters,” said Michael Rinn, Boeing vice president and ALTB program director. “With this successful experiment, the Airborne Laser Testbed has blazed a path for a new generation of high-energy, ultra-precision weaponry. ALTB technology and future directed-energy platforms will transform how the United States defends itself and its friends and allies. Having the capability to precisely project force, in a measured way, at the speed of light, will save lives.” Said Rinn.


During the test conducted yesterday evening the Boeing 747-400F based Airborne Laser Test-Bed (ATLB) intercepted an ascending liquid-fuelled ballistic missile in the first attempt to shoot down a ballistic missile by high power laser beam. A second attempt, conducted less than an hour later, involved a solid-fuelled missile launched from a land-based site on San Nicolas Island. The laser engaged the second target but terminated lasing short of destroying it. A similar target was destroyed by the laser last week (February 3rd) in a previous test of the system.

At 8:44 p.m. (PST), February 11, 2010, a short-range threat-representative ballistic missile was launched from an at-sea mobile launch platform. Within seconds, the ALTB used onboard sensors to detect the boosting missile and used a low-energy laser to track the target. The ALTB then fired a second low-energy laser to measure and compensate for atmospheric disturbance. Finally, the ALTB fired its megawatt-class Chemical Oxygen Iodine High Energy Laser, heating the boosting ballistic missile to critical structural failure. The entire engagement occurred within two minutes of the target missile launch, while its rocket motors were still thrusting.

The experiment, conducted at Point Mugu Naval Air Warfare Center-Weapons Division Sea Range off the central California coast, serves as a proof-of-concept demonstration for directed energy technology. The ALTB is a pathfinder for the nation’s directed energy program and its potential application for missile defense technology. The revolutionary use of directed energy is very attractive for missile defense, with the potential to attack multiple targets at the speed of light, at a range of hundreds of kilometers, and at a low cost per intercept attempt compared to current technologies.