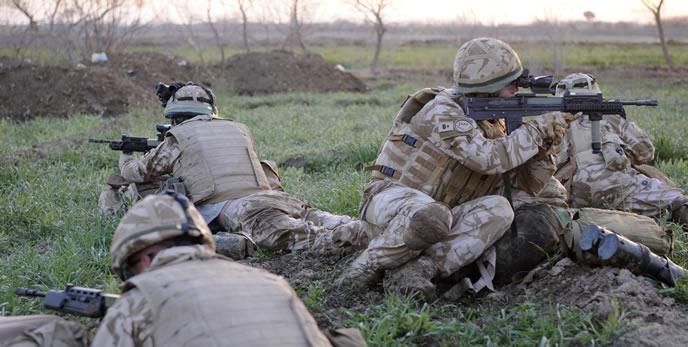 As the campaign to take over the town of Marjah enters its second day, the fog of battle has somewhat dissipated, bringing to light one of the untold truths over what the real battle is all about. Coalition forces conducting the operation are trying their utmost, to emphasize the role of the Afghan National Army as an equal member of the engaged military force, and lead element representing the interests and authority of the central government in Kabul. But the battle is not fought over the land, but on the hearts and minds of the local Pashtun tribe people, torn between their fear and loyalty to the residing Taliban, and the hope, while suspicion of the foreign-backed puppet regime in Kabul, promising the residents economic development and better living conditions.

The military assembled a divisional size battle group, numbering over 15,000 men, including U.S. Marines, British forces and Afghan National Army and police. To facilitate safe entry into the town, suspected to be heavily mined, and booby-trapped with IEDs deployed everywhere by Taliban warfighters, coalition troops are supported by mine breeching systems, designed to clear safe lanes for the heavily protected MRAP vehicles, approaching the town. This formidable show of force has no doubt made its mark on the local population. Once established inside the town, troops could encounter significant trouble, if the Taliban will choose to stay and fight. Operation Mushtarak (“Together”) proceeded with a well publicized and seemingly convincing military effort, demonstrating NATO’s determination to change things in the area. Just before the campaign started, commanders even publicized their willingness to accept the Taliban laying down their arms, but declaring they will relentlessly pursue those that insist to continue fighting.

The Afghan guerillas have no intentions to make things easy for the coalition, nor do they have plans to ‘play by the rules’. Most probably they will choose to disengage the attackers, which is the traditional guerilla tactic.

After all, they played this game many times before. Retreating to the mountains and desert, the Taliban stick to their turf – poor land-locked and isolated country, that has little to offer the new world, but growing illegal opium crops. In the past these mountain tribes were thriving in ‘protecting’ transportation routes, ‘taxing’ convoys carrying herbs, spices and exotic goods from India to Europe, which had to pass through their land. In the 20th century this source of income has dissipated, leaving the proud robbers with nothing but opium farming to live on. Those that opted to continue and live on their swords found new causes to fight for, joining the Taliban depending on foreign support by the Islamic jihad. In the past three decades this support proved to be dependable and also profitable, as Islamic warfighters gathered here to fight against the communist invasion in 1980. In recent years, the combination of opium and jihad war seems to have been particularly successful.
Having assessed the situation well in advance of the coalition attack, the Taliban made it clear to the population, that despite the newcomers’ declared eagerness to improve their livelihood, they will not stay in the area forever – but the Taliban certainly will, as it is their very environment.

Taliban will most likely avoid direct confrontation with superior armed coalition forces, and fight back only where it is pressed against the wall. Therefore, paradoxically, heavy fighting will most likely be the places, where coalition forces have succeeded in surprising the Taliban by disrupting their escape routes. On the other hand, Taliban’s battle plan would most likely revert to contain the attack, wait for the new troops to settle in, learn their routines and focus on the main objective – disrupting the coalition’s approach to the win the support of the local population. Therefore, ambushes would not merely aim to kill soldiers, but likely to expose the population to coalition counterfire, taking place in areas where communications and coordination do not work properly, identification of friends and foes are made problematic and innocent people are abundantly present , resulting in dramatic rise in collateral casualty rates. Lessons learned from the devastating attack on abandoned fuel tankers in northern Afghanistan, that took the lives of many innocent Afghans were undoubtedly well digested by the Taliban and will soon become part of their operational planning in their attempt to disrupt the government effort to impose their rule in Helmand province.

In order to convince the people on their good intentions, Coalition forces will have to dismount from their heavy armored cars, exposing themselves to potential Taliban attacks by snipers, ambushes, and cleverly camouflaged IEDs. The growing transportation on the roads will also provide more opportunities for attacks and robbery. Furthermore, billions of dollars pouring in through the corrupted Kabul government are likely to open new opportunities for the Taliban, rather than protect the south from this menace.

An indispensable weapon in this asymmetric battle is reducing support by the local population to Taliban. Psychological ‘manipulation’ could become a useful tool in denying the guerilla from getting such support. Winning popular support among the people of Helmand could enable the coalition to gain access to human intelligence, receive early warning about IED placements, pre-empt Taliban movements, preparations and regrouping.

A perception of ‘success’, uninterrupted by excessive civilian or military casualties, is imperative not only for the administration in Washington, London and Kabul, but also for the people in Helmand itself – where a succession of positive events could lead to a ‘change of heart’ among the locals, toward Kabul, eventually opening the coalition partners an escape hatch from this unforgiving war-torn country.

Operation Moshtarak is the first major operation under General McChrystal’s new strategy, that involves Afghan and ISAF forces working in partnership, with a clear focus of protecting the population. The operation has been planned to remove insurgents from areas of central Helmand not previously cleared by ISAF troops. The British and their Afghan partners focusing on the areas around Nad ‘Ali, and the Americans and their Afghan partners focusing on the Marjah region. This area, located 15-20 km west and southwest of the region capital Lakshar Gar in central Helmand, have been within the control of the Taliban for quite some time. Relatively isolated from the main roads, but close enough to NATO bases, the area became an important center of the insurgency.

The clearing phase of operation Moshtarak began February 13 and continued Feb 14, with the combined forces conducting a number of mounted and dismounted patrols. Elements of the combined force have been engaged in periodic small arms fire fights, and sniper fire. According to ISAF sources, a number of insurgents have been either killed or detained. No losses were reported among copalition forces in the second day, although some warfighters have sustained some injuries. On the first day ISAF reported two causalties – one briton and one U.S. Marine. There were wounded among the Afghan forces as well.

In a stark contrast to the low causalty rate among the warfighters on both sides, Afghan civilians have suffered the most – Two rockets from a High Mobility Artillery Rocket System (HIMARS) launched at insurgents firing upon Afghan and ISAF forces killed 12 civilians as they impacted approximately 950 feet (290 meters) short off their intended target, a Taliban stronghold in the Nad Ali district, in the Helmand province. Following the attack the use of HIMARS has been suspended and resumed two days later after an investigation cleared that the blame was not in the weapon system. Afghan sources have claimed that only nine among the 12 killed were civilian.

The clearing phase began before dawn on 13 Feb, through a ground assault combined with heliborne assault and air support, aimed at securing key objectives in Western Babaji, Nad-e Ali and Marjeh areas. Afghan units have been partnered with ISAF units throughout the operation and Afghan elements participated in all the planning stages. Immediately after seizing their objectives, the military invited local leaders for meetings to discuss future activities. In one such ‘Shura’ in the Showal District Centre, over one hundred locals attended. According to ISAF reports, “local elders across the area have expressed their support for the operation and indicated real enthusiasm for a permanent security presence and for the Afghan Government’s efforts to re-establish governance in the Nad-e Ali district.”

“I think one can see that in other areas where we had been providing the requisite degree of security for long enough, the ISAF strategy is clearly working.’ Air Chief Marshal Sir Jock Stirrup British Chief of the Defence Staff added.

After conducting a Shura with the village elders, the unit deploys a first patrol, led by thr Afghan National Army (ANA) element, moving into the Nad e Ali area of Helmand Province, an area once a Taliban stronghold. Photos above and below: SSgt Mark Jones MOD Crown Copyright

Marines with Alpha Company, 2nd Combat Engineer Battalion employ a buldozer to establish a temporary passage through a trench dug by U.S. engineers bac in the 1970s. Alpha Company built numerous makeshift bridges in order for Marines and vehicles to have a route into the Taliban stronghold of Marjah, less than 20 km southeast of the region capital Lashkar Gar. During the construction of their last bridge, Alpha Company encountered an improvised explosive device, no Marines were injured. (photo above: Lance Cpl. Walter Marino, USMC.) The marines have assembled with construction materials and pipelines to aid the civil reconstruction teams moving in for the follow-on phase. Photo bBelow: Lance Cpl. Walter Marino, USMC.

Highlighting the role of the Afghan National Army (ANA) in this operation is critical for building confidence in the Afghan forces, which so far were not much appreciated by the coalition. This is probably the reason why an assault on a desolate, minor objective as Marjah is blown out of proportion in such a scale.

NATO forces, primarily American and British, are training and mentoring thousands of ANA soldiers each month at the Military Training Centre, Kabul (KMTC). “It is absolutely fundamental we get this right.” says Lieutenant Colonel Nick Ilic, a British infantry commander in charge of the training. “This is our exit strategy. The guys down south in Helmand and elsewhere are holding the line, creating a safe environment for us to train the Afghan National Army (ANA) to the right standard and quality so they can take on the fight when they’re ready.” Photo below: ANA recruits march through the training center.