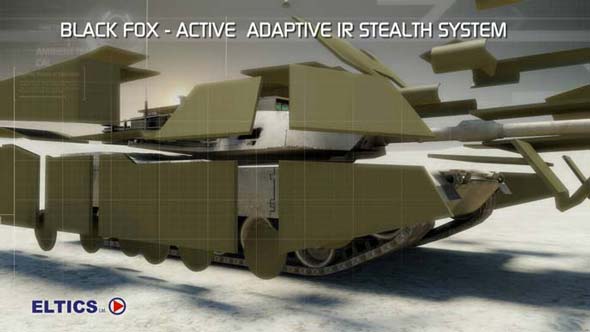 Thermal stealth technology being developed by the Israeli company Eltics promises to render military vehicles, combat helicopters and even entire naval surface ships invisible to thermal imaging surveillance sensors, targeting systems or missile seekers employing thermal sensors. The patented system, dubbed ‘Black Fox’ is designed to be applied as an add-on layer, on top of existing armor, or be embedded into the outer layer, comprising one layer in the ‘onion ring’ defensive concept of modern platforms.

‘Black Fox’ is an Active, Adaptive Multi-Spectral Stealth technology applicable to land, airborne and naval vessels. The concept has been in development since 2006 and was recently demonstrated in field experiments, demonstrating the ability to effectively blend parts of the platform into the background, while on the move.

The active stealth suite can be applied to totally conceal a large object, like a relocatable, forward command post, requiring stealth, in order to conceal the entire platform from overhead observation and targeting.

When applied on combat vehicles, the ‘Black Fox’ is designed to cover almost the entire platform, gaining the advantage of full stealth concealment from all sides, including top view. Yet, according to Ronen Meir, Eltics CEO, wrapping the entire vehicle is not mandatory – even partial application will also significantly gain in reducing the probability of detection at long and medium ranges.

The principle of ‘ Black Fox’ operation is based, in part on patents claimed by the company. The system employs two panoramic cameras scanning the surroundings through a 360 degrees hemisphere around the protected vehicle. Image processing and control electronics are used to sense and match the background scene, creating a deceptive image for display, on multiple active-mounted panels, on the protected platform. The image mimics the background signature, creating a stealth illusion, by realistically representing the surrounding ‘noise’ clutter and distinctive texture, thus effectively blending into the background.

The cameras are continuously scanning the surrounding area, aligned with the horizon on a pan-tilt assembly (PTZ), to efficiently render the correct image when the vehicle is moving, exposed over the skyline, or against changing backgrounds.

These cameras also perform periodical measurement of the protected platform, gaining critical feedback, monitoring effectiveness of the concealment it is providing. Another utility supported by the ‘Black Fox’ is the ability to trigger thermal signaling on demand. The active panels can be programmed to display a coded number or pattern, operating as a Combat IDentification (CID) system, triggered by the crew, with a laser beam or interrogator friend/foe (IFF) system. When the vehicle is on the move, the active panels display a changing image or pattern, maintaining an optimal concealment in every direction – frontal, sideways and top views, hiding the platform from prowling thermal eyes of satellites, UAVs, low flying helicopters or ground observations.

In addition to its capability to ‘blend into the background’, applying the signature of a nearby building, an orchard or a bush, ‘Black Fox’ can also mimic other shapes and signatures. For example, a system ‘worn’ by an M-1 tank can render the American tank to look like a Russian T-72, or ‘downsize’ the tank signature to clone as an M-113 APC, or even a non military pickup truck. The system can also enable the crew to manually ‘copy and paste’ background features and display them on their ‘Black Fox’ suite, to refine the stealth effect. The complete process is performed automatically and rapidly, enabling the crew to enter into a ‘stealth mode’ by the push of a single button. With such capabilities, the ‘Black Fox’ could become an important asset in the military’s ability to deny enemy use of automatic target recognition systems, by eliminating distinguishable details of potential objectives. Such capabilities could also be utilized for training, employing the system on smaller surrogate vehicles, designed to perform as larger combat vehicles.

According to Ronen Meir, the company has already demonstrated a working prototype of the ‘Black Fox’ in the field and is ready to proceed into system engineering, toward full-scale development, in cooperation with other Israeli defense industries.
The company plans to develop a ‘stealth’ suite for combat vehicles, to be applied as an outer add-on system or embedded into reactive or hybrid armor skin. He told Defense-Update that the company is also exploring possible airborne applications for helicopters and has already been approached by several foreign organizations over potential ‘Black Fox’ naval applications.

Concealing naval vessels could offer dramatic advantages for navies, particularly those operating in the littorals, where the maneuverability is limited in the off-shore area, but the proximity of coastal features enable concealment and stealth with the new system. For example, large military vessels can reduce their signature and assume the profile of non-combatant vessels, such as a supply ship, or merchant vessel. When employed with electro-magnetic (radar) stealth methods, the system can be activated, before an attacking anti-ship missile initiates its terminal guidance phase, utilizing thermal sensors. Eventually, the target can ‘disappear’ from the missile’s sight, when entering a ‘stealth’ mode, with or without the use of flares.

At the Eurosatory 2010 exhibition IMI and Eltics are announcing the integration of Eltics’ Active Stealth and reactive technologies and the hybrid armor solutions from IMI, to introduce an ‘Invisible Reactive Armor Protection’ (IRAP). According to Rami Sokolower, IMI Marketing & Business Development manager for IMI’s Slavin division, IRAP modules will be developed, produced and marketed by IMI and Eltics, addressing the world market of medium and heavy armored combat vehicles, including main battle tanks, armored infantry carriers and Mine Protected Vehicles (MRAP, MPV). The IRAP will be provided as a medium weight solution, to be employed as part of the vehicle’s multi-layered survivability system. “Using our stealth Black Fox technology, vehicles could avoid being detected and targeted by the enemy, denying effective engagement by anti-tank missiles, while improving the vehicle’s protection against advanced threats, such as RPGs and different types of IEDs.” Said Ronen Meir.

Since 2006, the Ashkelon located company has established a team of experts developing the entire system, from initial concept into a product. This task involved complex theoretical evaluation and simulations, of thermal signatures and thermodynamic analysis, hardware and software design and development of algorithms for signature sensing and processing, thermodynamic calculation and signature display. Eltics Vice President for Research and development is Dr. Dani Leshem, formerly the Chief Scientist at Rafael Advanced Defense Systems. Mj. General (ret.) David Ivri, a former Chief of the Israel Air Force and Director General of Israel’s Ministry of Defense is also an advisor to Eltics’ Board of Directors. 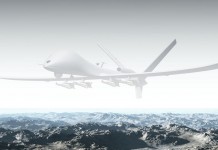