This year the Merkava tank is celebrating its 40th years anniversary. For four decades the Merkava program remained on track, keeping pace major revolutions in technology, strategy, economy and political. “It was not an easy task” Brigadier general Yaron Livnat, Merkava Tank Program Manager (PM) told Defense Update. In 2006 the program reached its lowest point, awaiting the general staff decision to pull the plug on the Merkava program and, in fact, the entire armored corps. 12 months later the program was back on track, as the IDF realized its erroneous judgment, recovering from the second Lebanon War, where the Israelis suffered significant hits but also proved their prowess, land maneuver reestablished its validity and necessity.

With a fully funded long-term recovery plan to evolve the tank into a ‘family of vehicles, supported at the highest levels of GHQ and MOD,’ the IDF fully embraced the development and fielding in the introduction of a new armored vehicle, more than 40 years after deploying of the first M-113 APC, the Namer armored infantry vehicle emerged as a totally new concept.

“The Merkava program represents a highly sophisticated, heavy industrial complex which has only few counterparts worldwide. The program, established by General Israel Tal 40 years ago, remains virtually unchanged” said Livnat, “we still have the same departments and quite a few of our technical experts are working here, after more than 30 years. The same organizational formation is still valid, although we implemented state of the art computing tools and machinery. That stability helped retain the engineering, operational, combat experience and technical expertise, gained through the program’s evolution” Livnat added.

From a program focused on the automotive, protected platform of the 1970s the Merkava Program Management office (PM) evolved and expanded into new fields of vehicle electronics, software design, electro-optics and advanced armor technology, which are all part of the Merkava Mk4 and Namer IFV designs.

“Unlike its counterparts worldwide, the Merkava PM office represents a special breed – a military unit under IDF command and a branch of the Ministry of Defense (MOD) which is running a ‘business’, managing an operation in the methods used in the commercial world. This approach enables us to address our customers as piers, while ‘speaking the same language’ with our suppliers” explained Livnat. 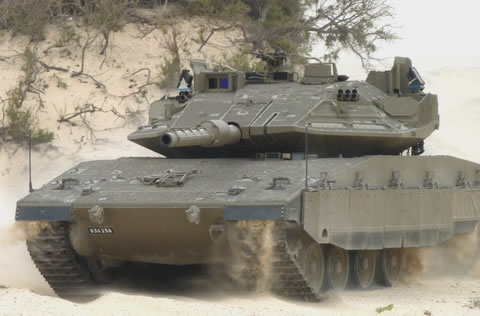 The development of the current generation Merkava Mk4 began in 1999 and represented a major step toward a modular, ‘open platform’. This unique approach enabled us to transform the tank from an armored vehicle, designed to fight other tanks, into a versatile platform optimized for a changing battlefield – from low-intensity asymmetric warfare to high intensity counter-armor operations. “In 1999 our charter was to design a tank that will survive changes and evolve with the time. We did not them call it ‘Asymmetric Warfare’. Back then we realized we will have to outmatch future threats with advanced protection, or active protection systems (APS), which did not exist at the time. But these were already included in the requirements and conceptual design of the tank, as we defined the interfaces of the armor, to accommodate future growth, as such technology would become available.  Today, Merkava Mk4 tanks are rolling out of the assembly line, equipped with the latest Trophy Active Protection System, integrated as a standard element of the protection suite.” 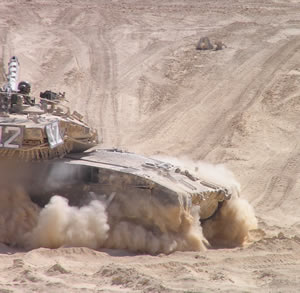 Similarly, it was clear that information technology will develop at a rapid pace and we wouldn’t like to be left behind, so we packed enough electrical and computer power, by designing powerful computers that use a scalable, distributed computing architecture,  sharing common, interconnected protocols and networks on board, providing the tank’s systems  flexible means to perform multiple tasks in an efficient, redundant and reliable manner.

In fact, rather than having a specific processor committed to individual tasks, the many processors employed on the Merkava Mk4, provide ‘services’ to applications, each service is prioritized by parameters like importance, urgency and process-duration. These processors can be located in different areas of the tank and are interconnected into ‘rings’, over multiple network paths, providing a resilient and survivable infrastructure. This approach also offers exponential growth, as specific elements are not restricted by memory, computing power or other operating parameters. The original network developed for the Merkava, preceded the Digital Army Program (DAP) known as Zayad, which was introduced in later versions of the tank and is gradually being applied to the current fleet.

Design versatility is also characteristic in other areas, including weapon systems, armor protection and combat support tool attachments, enabling the user to rapidly and flexibly configure the tank with mission-specific kits, designed for different applications. 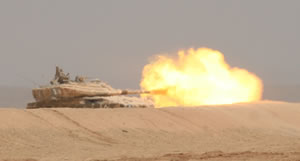 For example, an electrically controlled coax weapon-attachment is mounted on top of the main gun barrel, accommodating an automatic grenade launcher (AGL) or 0.5” heavy machinegun (HMG). This weapon enables the gunner to employ an alternative kinetic effect weapon, in situations that do not require firing the 120mm main gun. “To operate the AGL or 0.5” HMG the gunner uses the same firing and aiming procedures through the same sight,  operating the tank’s ballistic computer, which is informed on the specific weapon’s ballistic characteristics” Livnat explains. The weapon is automatically aligned with the gun and connected to the gunner’s optics and fire control, through a common interface, embedded in the tank. This interface indicates the type of weapon and ammunition being used, enabling the ballistic computer to instantly lay the weapon in the correct aiming solution. “This versatility was the key in the transformation of the Merkava mk4 in recent years, from a main battle tank, into a versatile warfighting platform, capable of effectively engaging soft and urban targets, in less-intensive warfare, without sacrificing its operational capabilities in high intensity combat”, General Livnat concluded. 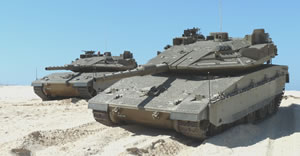 In the past, tanks normally fought and survived within rigid formations. Today, they can operate in looser ‘packs’, seamlessly sharing targets, coordinating activities amongst themselves and cooperating with other elements, over the DAP C4I network. After 10 years and numerous improvements in software, we still operate the same displays and user interface displays, although the version currently in service, has improved dramatically in the level of details and situational presence it provides to the user. We expect to replace these only when we shall implement the next phase-upgrade of the battle management network.”

The multiple networks embedded in the tank are also enabling rapid introduction of new electronic equipment, enabling the Merkava Mk 4 to remain up-to-date, with the highest standards. “Previous generations of tanks are not as easily upgraded, and their modernization process is extensive and laborious, and, therefore difficult to justify in times of budget cuts.” Applying the unique Merkava Program Office versatile process, is one of the reasons for Livnat’s confidence about the future of the Merkava production. “The IDF and MOD are supporting continued production of Merkava and Namer vehicles, at least throughout the next decade. This continuous production of Merkava Mk4 will enable the IDF to gradually phase out older tanks, that are more difficult to maintain and difficult to upgrade” said Livnat.