Home Land Systems Armored vehicles Namer – to be Made in the U.S.A? 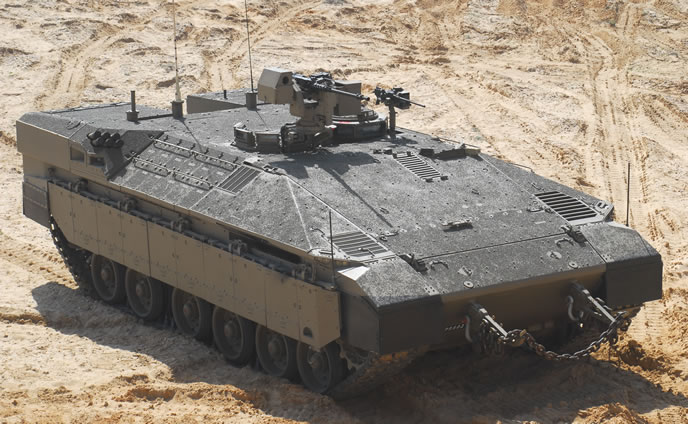 An update on the Merkava based Infantry Fighting Vehicle

At present all the Namer AFVs are produced for the IDF, sharing the production capacity created for the Merkava tanks. Since the IDF Ground Forces Command would like to field more vehicles than the plant can currently produce, in an effort to quickly phase-out obsolete APCs, the IMOD is facing a tough choice – whether to minimize or even sacrifice the production of the Merkava tanks,  to rush more Namer vehicles into the field, or to turn to the U.S. and spend part of the Foreign Military Funding (FMF) military assistance Washington is allocating to Israel, for the acquisition of defense products made in the U.S.A. Israel is hopeful that if the Namer will be assembled in the U.S., and be shipped to Israel for completion, with locally made systems, the IDF will be able to accelerate the fielding process of more vehicles to active units.

“This is a tough decision we’ll have to consider very seriously” Brigadier general Yaron Livnat, Merkava Tank Program Manager (PM) told Defense Update. “While economically it is an attractive proposition, we must assure that industries supporting the program will not be forced out of business, by such a move. We also must be prudent in retaining our indigenous armored vehicle production base. Since we consider the tank program being a more challenging and a complex undertaking, we decided to retain the full set of tank development, engineering and production capabilities well into the future.” Livnat added. Thus, by eventually producing the Namer overseas Israel will be able to retain the local currency budget, to finance the Merkava production line at its present pace, “This process will also prevent aging of its tank fleet, as we will continue to replace earlier generation Merkava tanks with brand new Merkava Mk4, in parallel to fielding Namer vehicles in an accelerated delivery, as requested by the IDF.”

According to General Livnat, requests for proposal were recently released to three US companies – General Dynamics Land Systems (GDLS), BAE Systems and Textron Defense.  “They are all excited about the program and we await a final decision soon,” said Livnat. Producing Namer AFVs in the U.S. could also become an export opportunity, “The Namer addresses many of the requirements stated by the U.S. Army for its Ground Combat Vehicle, however, we are interested in buying vehicles, and are not selling, or promoting them abroad” said Livnat. However, all three U.S. companies approached with whom Israel is discussing co-production of the Namer are excited to learn more and all were keen to have the potential to offer elements or derivatives of the vehicles addressing the U.S. army plans.

Conceived in a Virtual World

The vast experience gained with the Merkava tank has helped the program office to turn the Namer, from a design concept into a fully operational combat vehicle, in surprisingly short lead-time, less than three years. Electronic design and modeling was a major element in the success of the program; the vehicles designers have used state-of-the-art simulation tools to improve, test and simulate the ergonomic aspects of the vehicle, its subsystems and components, and the effect they might have on the occupants and operating procedures, maintenance and support. For example, simulations assessing extended operations, in the fully loaded vehicle, could assess how seats should be spaced for optimal comfort and safety, simulating how fully loaded soldiers move around in the vehicle, access equipment and conduct their tasks, while the vehicle is moving. In the past, such assessments required extensive and lengthy experimentation with ‘hand made’ technology demonstrators and prototypes, that preceded the final design.

These vehicles were extensively tested in the field, but after all these efforts they seldom represented a compromise, rather than best solution. Testing and improving the Namer in the virtual world enabled the designers to perform more extensive and complete simulations, particularly as to the ergonomic design of the vehicle and its systems.  Different occupants could be simulated, male and females, tall or short, big and small models could all be ’stuffed’ into the virtual prototype and measure the comfort, performance, flexibility and other important ergonomic qualities of the vehicle. Such simulations contributed to improve and accelerate this process, saving immense costs of remodeling, retooling and reproducing the actual vehicles. Another aspect of the design was the definition of standardized assemblies and attachments, enabling the introduction and insertion of future elements, along the operating methods of the ‘telescopic Design’. This practice, developed during the early days of the Merkava tank, enables the engineers and designers,  to schedule and insert an element in the future, thus enabling the accelerated deliveries of the initial production series completion, although they may still be lacking some non-critical elements. For example, the first production batches of the Namer were produced without air conditioning. These systems were inserted few months later, after the vehicles were already deployed in the field.