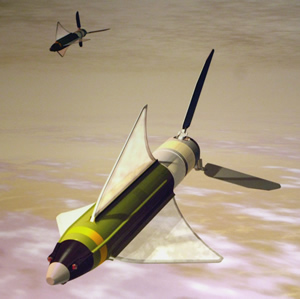 ATK is developing a lightweight precision guided munition, compact and light enough to be carried by the dozens or even hundreds by unmanned aerial aircraft. The new glide weapon is packed into a conformal container launcher carried under the wing of the Shadow, fitted on top of the strut root. Upon release the weapon’s fins are extracted and three airfoils pop into place, as the weapon glides on its path to the ground. As the three laser detectors are activated, they seek laser signals reflected from the designated target. Once the laser spot is detected, the weapon’s flight control processor computes the necessary corrections and activates the tail fins to point the weapon on the course homing in on the spot, hitting the target with high precision.

The weapon weighs about six pounds (2.7 kg). Its hand-grenade size warhead makes more than half that weight (about four pounds or 1.8 kg). The resulting effect offers maximum lethality against exposed targets, with minimal collateral damage to their surrounding.

Persistence and immediate response close air support based on such weapons has the potential to transform combined air/ground operations, as UAVs loitering above a ground combat element could continuously support ground forces through sustained combat engagements, without the logistical and operational burden when rotating through rearmament or replenishment cycles. Brigades could rely on their own Small UAVs assets like the Shadow, each carrying four weapons in addition to the standard ISR and radio relay payloads. Larger drones will employ multiple ejector racks packing 12 weapons or more, each loaded rack could be carried under a pylon currently carrying Hellfire missiles. Therefore, an MQ-1A Predator currently carrying two Hellfires will carry 24 of the new weapons. A similar load will be carried by the MQ-5B Hunter, while the MQ-1C Grey Eagle will be able to carry twice that load. The Air Forces’ MQ-9 Reaper will be able to carry 72 units and the A-160 destined for the Special Operations Command will haul over 200 such weapons.

The miniature guided weapon currently under development could, potentially, replace current cluster weapons banned by international treaties. When employed in weapon systems, individually targeted guided weapons could be directed to scatter over the area to focus on specific target location, guided by GPS – or disperse over a specific area in a pattern maximizing the desired effect. Optional carriers such as new cruise missiles, or loitering weapons, will be able to employ such guided submunitions to attack multiple targets along their flight path, on a single mission.