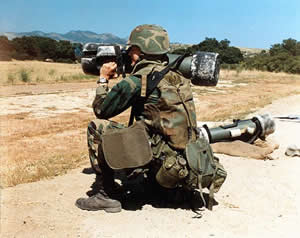 Back in the early 2000s the U.S. Marines pioneered a new concept fielding a low cost, lightweight precision guided anti-tank missile called the FGM-172A Predator. The missile was developed by Lockheed Martin [NYSE: LMT], and was designed to provide the corps’ firepower beyond the range of their unguided SMAW weapons. The missile employed two major advantages – ‘point and shoot’ aiming system and ‘fire and forget’ inertial guidance, enabling quick, simple yet accurate and effective operation. The autonomous guidance compensated with cross-wind and other disturbances with in flight corrections. Another advantage was the ‘soft launch’, enabling firing from enclosure, enabling the warfighter to fire the missile through windows or from the protection of building without wearing special ear protection.

The missile system is delivered as a disposable system, weighing about 9.7kg. (21 lb). To enable this lightweight missile to defeat heavily protected tanks, the missile was designed to engage the target with a shaped-charge ‘Explosively Formed Penetrator’ (EFP) pointed downward, through ‘top attack’, hitting the tank’s most vulnerable upper area. Despite its superior capability the Predator has not been accepted beyond the Marine Corps, as in the U.S. Army did not follow the Marines lead and preferred to remain with the more capable yet expensive Javelin, while considering a new derivative of the unguided Saab AT-4 to enable firing from confined space when operating in built-up area.  Lockheed Martin lost another prospect in the U.K., which opted for the Swedish competitor – MBT LAW. 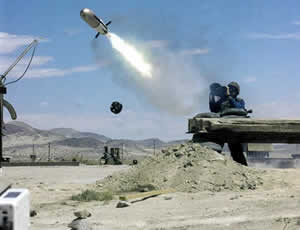 Lockheed Martin produced Responding to an urgent request from warfighters, Lockheed Martin expanded the capabilities of its Predator anti-tank weapon and delivered 400 rounds to the U.S. Marine Corps. The conversion of Predator from a top-down anti-armor weapon to a direct-fire urban assault weapon was prompted by the need for fire-from-enclosure assault weapons, which has become paramount to support combat actions in Iraq. It took the company only six months to come up with the redesign, The program Renamed as the ‘Short-Range Assault Weapon-Multiple Purpose Variant’ (SRAW-MPV) MFG-172B, the Predator evolved into the precursor of today’s ‘urban assault missile’, fitted with a multiple-purpose blast warhead, enabling it to defeat a variety of targets such as buildings and bunkers, as well as light-armored vehicles. For direct attacks the missile flies an unguided, flattened trajectory employed in line-of-sight engagement. Its main advantage is the capability of being firing from confined spaces and improved accuracy up to the missile’s maximum range of 600 meters.