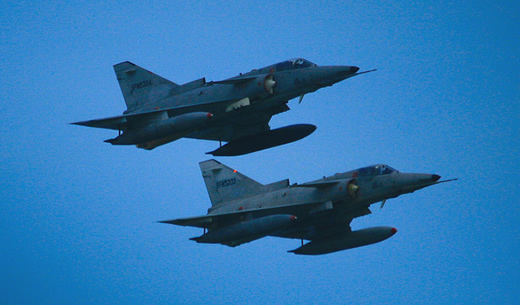 Two Sri-Lanka Air Force (SLAF) IAI Kfir jet fighters operating from the Katunayake Air Base have collided in mid-air when flying in tight formation, rehearsing a fly past in preparation for the 60th anniversary celebrations of the Sri Lanka Air Force. According to a preliminary investigation, one of the pilots, 28 year old Flight Lieutenant Monath Perera lost control of the aircraft and collided with the lead aircraft, flown by No. 10 Squadron Leader Vajira Jayakody. Jayakody managed to eject safely but Perera failed to eject and was killed in the crash.

The Commander of the Air Force has appointed a Board of Investigation headed by Air Vice Marshal Kapila Jayampathi to look into the causes of the accident. A preliminary report is expected next week. Before the crash Sri-Lanka operated ten Israeli Kfirs flying  with No. 10 fighter squadron. The unit was equipped with eight Kfir C2 two C7s and additional two C7 two-seat trainers.

The SLAF acquired the first six Kfir C.2s and a single TC.2 from Israel in 1995-1996. Nine additional fighters, including four C.2s, four C.7s and a one two-seater TC2 were acquired in 2005 to replace aircraft attrition during the civil war.