The growing threat of missile attack by North Korea has concerned Seoul for decades, but only recently defensive systems are showing progress, with interceptor technology becoming available on the domestic and world market. Last week the Agency for Defense Development (ADD) of South Korea unveiled the Cheongung – a new medium-range Surface to air Missile system designed to beef up the country’s air and missile defense.

Missiles deployed by North Korea are covering the entire area of the South, Pyongyang has deployed more than 600 short-range Scud missiles north of the Demilitarized Zone (DMZ), with a range of 320 to 500 kilometers. In addition, 200 Rodong missiles positioned inland have a range of 1,300 kilometers, reaching every point in the South. North Korean Intermediate range ballistic missiles can also reach Russia, China, Japan and Alaska.

To defend against North Korean missiles and rocket attacks the Republic of Korea is eying a three-tier aerial and missile defense system to integrate radars, missile interceptors of different types through a unified battle management system. Preliminary study on missile shield system to be completed by year-end.

Seoul principal air defense layer operates six batteries of Patriot PAC-2 GEM/T missiles along with 24 Hawk XXI batteries. These assets are more capable to defend against aircraft than hit ballistic missiles. Two missile interceptor/air defense programs currently underway in Russia will be transferred for production in Korea, one covering extended range and high altitude, and another handling the middle-tier zone.

The first is the medium-range air defense system known as KM-SAM, developed in Russia by the Almaz Design Bureau, in association with an industry team from Korea lead by Samsung Thales. This team included missile builder LIG Nex1 and platform manufacturer Doosan DST. Further localization and industrialization were done in South Korea, making the new weapon system an indigenous program. 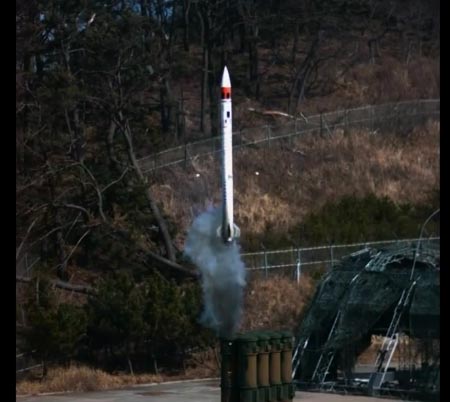 The new SAM called ‘Cheongung’ (Iron Hawk) can intercept targets at altitude up to 15 km and at a range of about 40 km. LIG Nex1 plans to begin production in 2012 and according to the original schedule, begin replacing the first MIM-23 Hawk batteries beginning 2013. Following the induction of the new Cheongung Seoul plans to offer the missile for export. Seoul estimates the market potential of such missiles at over US$2.3 billion. Apparently, the Russian Company that developed the system, Almaz Antey, thought the same as they kept the program alive after transferring the prototypes to Korea. The Russian version known as Vityaz could be ready to replace first generation S-300PS (5V55R) missiles, covering a similar intercept envelope, by the end of their service in 2015.

A Cheongung battery comprises a fire control center, a multi-function radar and up to eight fire units, each carrying eight missiles in ready to launch configuration. It is designed to engage multiple targets simultaneously while tracking (hundred?) additional targets. The key for this capability are the compact multi-function radar developed by Thales-Samsung. Target data and intercept commands are transferred to the missile just prior to firing, with mid-course updates relayed in flight. The vertically launched missile is designed for high maneuverability withstanding loads of up to 50g. It weighs 400 kg, and uses INS guidance with midcourse updates, with active-homing RF seeker for terminal guidance. The multi-function radar is a 3D plannar active array system operating in the X band, it rotates at a rate of 40 rpm and covers up to 80 degrees in elevation.

The upper tier interceptor will be designed intercept ballistic missiles, offering capabilities similar to the American THAAD missile. This new missile is expected to be based on the Russian S-400 technology; it is designated Cheolmae 4-H, and will offer a range of 150 km and ceiling of about 200,000 ft, offering performance levels twice superior to the Patriot and future Cheolmae II missiles. This project is expected to cost around $812 million.
The Korean Navy is also planning to deploy anti-ballistic missile capability on its new KDX AEGIS destroyers. Unlike Tokyo, that has entered the U.S. SM-3 ABM program as a development partner, Seoul preferred to go its own way and develop its won version of a missile interceptor under ‘Project Guardian’, at an investment of about US$1 billion.

The baseline for Seoul’s future the missile defense capability are two EL/M-2080 ‘Super Green Pine’ radars, ordered from Israel’s IAI Elta in 2009. The radars will be able to detect hostile missiles 800 km away, providing missile defense assets ample early warning for response. These radars will also integrate with the SPY-1 radars of the AEGIS KDX destroyers to provide the situational picture for the Korea Air and Missile Defense center (KAMD) beginning next year.