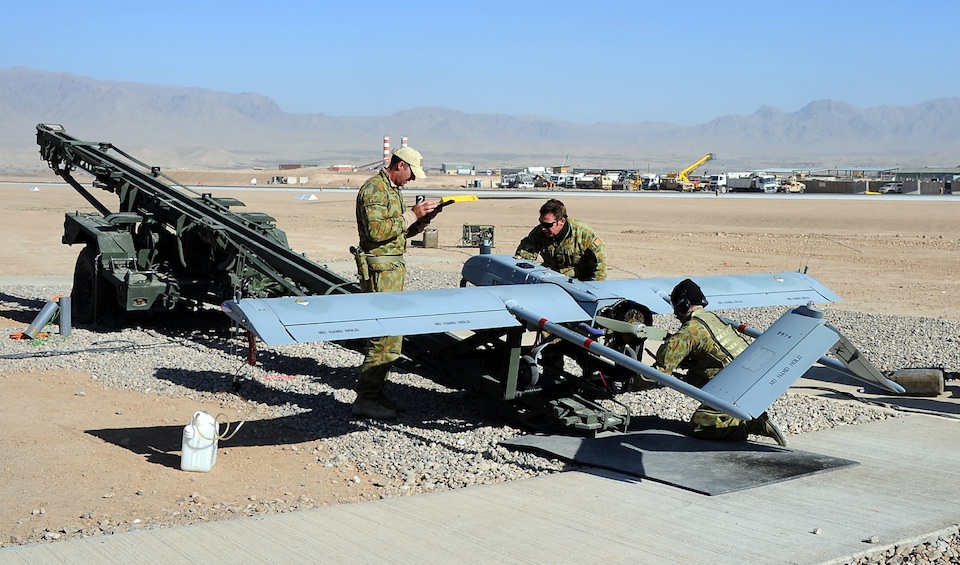 The Textron Systems (AAI) RQ-7B Shadow 200 Tactical Unmanned Aerial System (TUAS) has officially commenced operations with Australian forces in Afghanistan, providing an enhanced capability to the International Security Assistance Force (ISAF). The Shadow 200 is replacing the ScanEagle leased by the Boeing Company, which has been in operation since mid 2007. “ScanEagle has been the vehicle for the Australian Army to develop its Unmanned Aerial Vehicle (UAV) capability and the Army is now taking the next step by employing the Shadow 200 TUAS” said Chief of Joint Operations, Lieutenant General Ash Power. The first Shadow 200 was delivered in August 2011, ahead of schedule.

The Shadow 200 system captures full motion video during both day and night operations, Sensor images and metadata is sent back to a ground control station up to 125 kilometres away. It can recognize targets on the ground while operating at an altitude of up to 10,000 feet.

The Scan Eagle UAS was leased by Boeing in 2007, few months prior to the official termination of another UAS called I-View, developed jointly by Boeing Australia and Israel’s IAI Malat for the Australian JP129 contract in 2006. This project was terminated in 2008 with Scan Eagle fulfilling the ISR gap, supporting Australian troops in Afghanistan and Iraq. Studying alternatives available at the time, the Australians realized the Shadow 200 was the only available choice, but the system was not available for export at the time, fulfilling the US Army and Marine Corps urgent needs for organic brigade-level ISR. In July 2010 the US cleared an Australian request for the AAI Textron Systems RQ-7B, paving the way for formal orders from Australia, Italy and Sweden.

Overall the Australian order under Joint Project 129 Phase 2 would be worth about $218 million, which covers two units and four ground control systems (GCS) modules to support multiple operational sites and training facilities. Each Shadow 200 system comprises five aircraft, ground control stations, a launch and recovery element, and associated equipment, logistics and training. Nevertheless, the Australian Army quoted much lower (A$90) million investment in the systems, which may relate to the unmanned aircraft, but not the mission Payloads which are often as expensive as the aerial vehicles carrying them. The Shadow 200 carrying the IAI/Tamam 20kg (51 lbs)  POP300D multi-sensor EO payload has the capacity to carry concurrently an electro-optic camera, infra-red camera, and three separate lasers – for target designation, pointing and range finding, along with communication relay payload. (These were the requirements the Australians originally wanted the I-View to deliver, five years ago).

The first operational rotation of Australian personnel has been trained in 2011 in the United States; simulation equipment has arrived; and the first test flights have been flown at Woomera. As of early 2012 the units are currently based in Multi National Base Tarin Kot in Uruzgan, Afghanistan.

During almost five years the ScanEagles supporting the Australian forces have flown over 6,200 missions logging approximately 32,000 hours in Afghanistan, and made significant contributions to the force protection and situational awareness of the Coalition Force soldier on the ground, Gen. Power said. “This was an average of 22 hours per day over the four years and 10 month period – a tremendous effort. While the Shadow 200?s sorties are shorter in duration than those of its predecessor, the ScanEagle, it provides a substantial increase in capability.