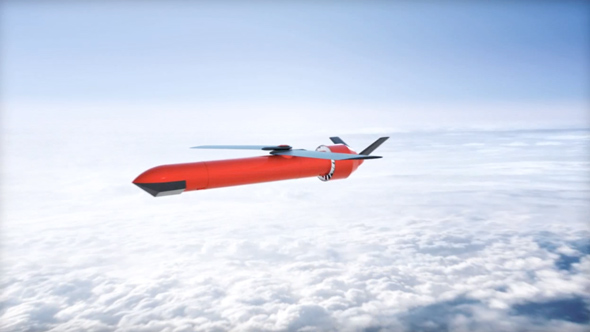 The system as a whole is designed for ‘persistent engagement’ in mind, deploying dedicated sensors low above the enemy area for hours, allowing the unmanned platform to maintain stand-off distance from the target, thus remaining relatively safely for longer missions.

The company’s successful introduction of ‘Concept Vision’ plans in 2010 and 2011, have helped harnessing the imagination and innovation of its European workforce through the creation of inspirational and ambitious concepts for future weapon systems. “As in previous years, MBDA will use the concepts generated to stimulate our customers, suppliers, shape our markets and challenge our own assumptions about the possibilities for the future.” Wadey said.

The Concept Vision CVS301 ‘Vigilus’ system comprises a common ‘intelligent launcher’ and several types of effectors (guided weapons) – the first two include a rocket boosted glider and electrically powered, ducted fan propelled optionally armed expendable loitering ‘scout’. Both weapons will be designed to enable direct (man in the loop) control from the ground, by the UAV operator or by the supported element.

The Vigilus weapon system comprises an integrated launcher and communications unit called ‘Armatus’. Each such carrier weighs 70 – 100 kg and will be configured to be carried by platforms flying at low to medium speed carrying any combination of small, medium or large weapons. MBDA visionary scientists see Armatus as an ‘intelligence launcher’ providing a seamless interface between the platform and weapons. Among the unique approaches MBDA is working on are connectionless interface between the launcher and weapons, and live, on-board mission planning capability. MBDA envisions employing an innovative new 3D model generation for target identification and tracking as part of its futuristic ‘intelligent launcher’ concept.

The basic Armatus configuration can also carry a single medium weight ‘Caelus’ loitering scout missile, weighing about 30 kg. Its wingspan will be about two meters, the length will be about 1.80 meters. This electrically propelled vehicle is designed as ‘persistent target identification and tracking system’, flying low above enemy area undetected, thanks to its low acoustic and thermal signatures. It will be able to throttle from loiter speed to high dash or attack velocity, and tune its warhead to match the type of target to be engaged (armored vehicles, soft targets etc.) Caelus will provide close-in view of targets,supporting the UAV operator by descending below clouds, and loiter for up to two hours. It will have a payload capacity of one kilogram, comprising of extra battery, enhanced ISTAR payload or a small warhead.

The weapon of the CVS301 system is the 80mm ‘Gladius’ type miniature gliders weapons. The Armatus launcher will be able to carry eight Gladius weapons along with a single Caelus. After being released from the launcher, the 80 cm long Gladius will be boosted to subsonic speed and expand the wings over 44 cm span, to continue on an unpowered glide to the target up to 30 km range. Each Gladius will weigh up to seven kg and be equipped with an Explosively Formed Projectile (EFP) weighing up to one kilogram. Up to four Gladius weapons would be targeted simultaneously from each Armatus launcher, at different targets (a MALE platform will be able to carry multiple launchers with different weapon configurations).The missiles will be controlled from the UAV mission control center (GCS) or directly by the supported element calling the attack (and often having the target in sight). For such control ground forces will be equipped with a standard console that will employ the CVS301 target engagement software. The weapon will employ a jam-resistant Global Navigation System (GNSS), enabling the weapon to home in on the target’s coordinates with high level of precision.

The Armatus launcher will also have room to carry up to three relatively heavier guided missiles (yet unnamed), each weighing about 100 kg.