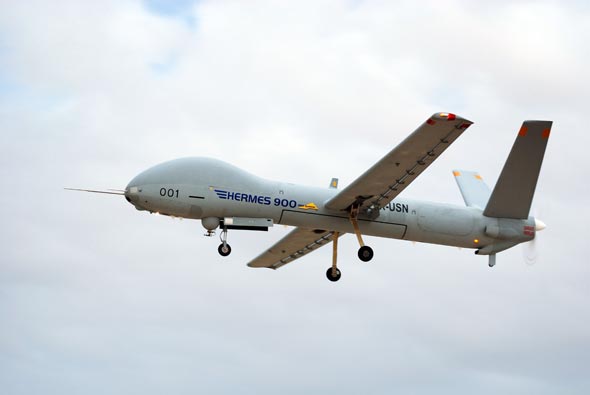 The Boeing Company is teaming with Israel’s Unmanned Aerial Systems developer Elbit Systems to market Elbit Systems Hermes class UAS in the US and select international markets. The companies have signed a Memorandum of Understanding (MOU) formalizing this cooperation at the Farnborough Airshow today. The agreement covers marketing and sales of Elbit’s Hermes450 and 900 UAS product lines. The team expects the combat proven Hermes family systems to be well positioned to meet the growing roles UAS are expected to play in supporting US forces towards the next decade.

In recent years Boeing has been developing its portfolio of unmanned systems. Through the acquisition of InSitu (the Scan Eagle manufacturer), Boeing established a foothold in the small/tactical UAS market, eventually winning the Marine Corps’ prestigious Small Tactical UAS (STUAS) contract with the new RQ-21 Integrator system. With the Scan Eagle, Boeing also scored multiple Intelligence, Surveillance and Reconnaissance (ISR) service contracts in the US, Australia and, most recently, Singapore. However, in the field of tactical/Medium Altitude Long Endurance (MALE) Boeing did not have an off the shelf solution, in the absence of an adequate platform. Although announcing a similar cooperation with another Israeli UAS company Aeronautics a year ago, Boeing remained out of several international and domestic programs in North American market. Elbit System hasn’t been successful promoting its systems in the US either. Few years ago the company established a joint venture with General Dynamics to bid on the STUAS but this venture has dissolved after Boeing won the program. Elbit has recently bought GD’s share in the JV, to continue promoting its smaller UAS on its own.

Hermes 450 is a multi-role, high-performance tactical UAS, providing the primary platform of the Israeli Defense Forces in counter-terror operations. A combat proven and mature UAS with more than 400,000 operational flight hours, Hermes 450 has been successfully operated by a number of international air forces, including the UK, Singapore, Georgia and Brazil. The larger Hermes 900 was introduced later, augmenting the capability of the Hermes 450 with a platform that can carry twice the payloads for extended missions, on a platform designed from baseline for over-the-horizon, persistent multi-mission, multi-payload missions. Hermes 900 is well suited to perform ground support and maritime patrol missions. The two platforms are sharing identical building blocks sharing interoperable systems and support. In the past year Hermes 900 has been ordered by three customers, Israel, Chile and Mexico.