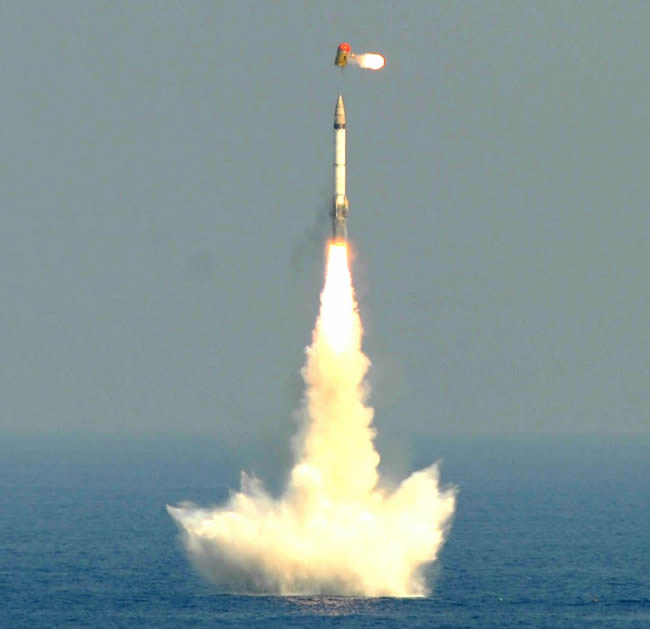 Moving a step closer to completing its nuclear triad, India today successfully test-fired a submarine launched ballistic missile, with a strike range of around 750 kilometres. The K-15 Sagarika missile was launched from an underwater pontoon simulating a submarine launcher, in Bay of Bengal. Defence Research and Development Organization (DRDO) chief VK Saraswat told the Indian press that all the test parameters of the test firing were met.

According to Saraswat, the test concludes the development phase of the K-15 missile, and the missile is now ready for deployment on various platforms including the indigenous nuclear submarine INS Arihant which is under development.

So far, India had the capability of delivering nuclear weapons from land and aerial platforms only. The missile-equipped submarine will provide the third leg of the strategic TRIAD nuclear deterrence India has been seeking to establish. India has a no-first-use policy for nuclear weapons and the development of an SLBM boosts its retaliatory strike capability, experts said.

K-15 is part of the family of underwater missiles being developed by the DRDO for the Indian strategic forces’ underwater platforms. DRDO’s Hyderabad-based Defence Research and Development Laboratory (DRDL) have developed this ballistic missile. This is the first missile in the underwater category to have been developed by India. Officials said more than 10 trials of the missile have been performed earlier. Today’s was the last development trial of K-15. India is also developing three additional underwater missiles for its submarines, including K-4/5 (3,500 km range), the two-stage, subsonic Nirbhay  loitering cruise missile reaching 1,200 km and the Brahmos super-sonic cruise missile 290 kilometres respectively. The Nirbhay was reportedly being prepared for a test flight in February 2013.