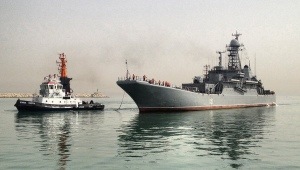 The Russian Amphibious Support Ship Azov arrived yesterday at the port of Haifa, in northern Israel, on a three day visit, it is the first time a Russian warship calls at an Israeli port. Defense-Update reports.

The Azov is one of six Russian naval vessels deployed to the Eastern Mediterranean, maintaining a Russian presence near Syria. Russia currently has six ships in the Mediterranean, including the Azov, which made frequent trips to the region before, calling at the Russian resupply base in the Syrian city of Tartus. Another six ships of the Pacific Fleet are on the way to the Mediterranean and expected to join the task force later this month.

According Captain Alexei Komaro, who heads the landing ship unit of the Black Sea Fleet, the task force including the Azov is due to perform exercises off the Syrian coast. Captain Komariv told the Russian Novosti news agency that the task force is prepared to evacuate Russian citizens from Syria, though no such order was given so far.

The Russian vessel will resupply and allow the crew to rest, a spokesman for the Russian Navy said. City residents will also be allowed on board for a guided tour and treated to performances by the Black Sea Fleet orchestra reinforced by marines.