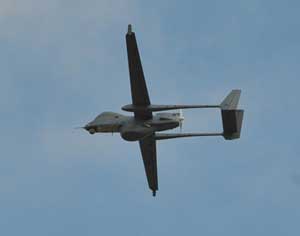 The test was conducted by an international consortium led by Spain’s Indra, in cooperation with AT-One, CIRA, SES ASTRA and Thales Alenia Space. The project demonstrated the safe operation of RPAS in non-segregated airspace using satellite communications.

During the trial, a manned aircraft from the Spanish air force academy approached the UAS, simulating frontal and 90˚ collision trajectories. “The pilots of the two aircraft followed the separation instructions issued by the air traffic controllers, demonstrating the safe operation of remotely-piloted aircraft, even in an emergency situation,” the EDA, ESA and Indra said in a joint statement.

The initiative followed another ESA study (ESA SINUE) during which SES was already partnering with INDRA, the Spanish information technology and defense systems company.

Check the test summary on the ESA Page.