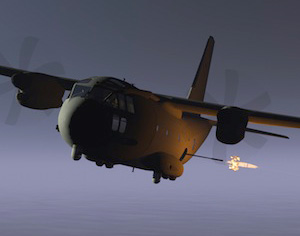 Israeli sources confirmed that Israeli weapon system may be offered to the package of the MC-27J aircraft equipped with a 30 mm gun. The planned gunship variant of the C-27J will undertake the first test firings of its 30mm cannon while slaved to an electro-optical/infrared sensor at the end of this year or early 2014.

MC-27J is a new multi mission transport aircraft jointly produced and marketed by Alenia Aermacchi and ATK. It is a roll on/roll off (RO/RO) aircraft based on the C-27J Spartan. The MC-27J is designed to support air forces and Special Forces involved in the tactical transport, intelligence, surveillance and reconnaissance (ISR) missions, and provide and accurate rapid fire support assisting in anti-terrorism operations, the evacuation of military and civilians from crisis zones and the fight against asymmetric threats. The MC-27J is based on airframe of the C-27J, its length is 22.7m, wing span of 28.7m and a height of 9.6m. The maximum take-off weight of the MC-27J is 30,500kg.

The MC-27J is modified to accept a pallet-mounted mission system comprising a mission management system, and different weapons systems, expanding the aircraft capabilities with mission-specific strike capabilities. The principal weapon system to be adapted at the baseline is the  ATK GAU-23 Chaingun with two ammunition loaders. The aircraft will also mount two electro-optical gimballed 15″ payloads with day, night and target designation capability, as well as an expanded communications suite.

The aircraft load will be determined by the mission – the basic cargo transport will devote the entire cargo bay for payload. On basic ISR missions, one mission payload will be used, providing persistent area surveillance and mission oversight. When used as an airborne command and control, the aircraft will carry two mission pallets, providing battlefield communications and video gateways and enhanced intelligence support in addition to the ISR pallet. The basic gunship configuration will use the ISR pallet, mission oversight and coordination and gun pallet while enhanced gunship configuration will also add the PGM payload.

ATK and Elbit Systems Ltd. had recently received a contract award through the Defense Acquisition Challenge (DAC) Program to provide a low-cost, light-weight, precision guided missile for the U.S. Special Operations Command (USSOCOM) evaluation. This missile incorporates lock-on before and after launch and employs a penetrating warhead with sufficient kinetic energy to defeat hardened targets. The project directly supports a USSOCOM requirement that the companies are ready to meet with their Guided Advanced Tactical Rocket (GATR) and Precision Guided Rocket Launcher (PGRL). The Israeli sources point to a possibility that the cooperation between Elbit systems and ATK may result in adding Israel made weapons systems on the MC-27J.

Unlike other strike aircraft, the MC-27J will mount the PGRL on its loading ramp, and fire the weapons backwards. This configuration will enable the aircraft to deploy both the gun and PGM on the same mission.