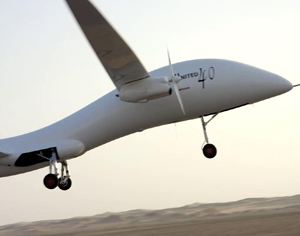 “We are talking about at least two United 40 Block 5 models developed by the company ADCOM Systems,” the source, who preferred to remain anonymous, told RIA Novosti. United 40 is a medium-altitude, long-endurance unmanned aerial vehicle (UAV), designed to carry out near real-time combat assessment, special and reconnaissance operations and communications relays. The vehicle can carry up to 10 air-to-ground missiles with a delivery range of 60 kilometers and fly for up to 120 hours, according to the developer.

The United 40 Block 5 model was unveiled at this year’s IDEX arms show in Abu Dhabi in February, and made its first test light in March (see video below). Its estimated cost is $20-30 million range.

The Russian military stressed a need for advanced reconnaissance systems in the wake of a brief military conflict with Georgia in August 2008, when the effectiveness of Russian military operations was severely hampered by a lack of reliable intelligence. According to various estimates, the Russian military needs up to 100 UAS;s and at least 10 guidance and control systems to ensure effective battlefield reconnaissance. Immediately after the Georgian campaign Russia turned to Israel for unmanned systems, buying Searcher II and I-View tactical UAVs and Birdeye 400 mini drones from israel Aerospace Industries (IAI). However, Israel’s MOD denied the transfer of the larger, more sophisticated Heron I drone Moscow also needed.

Russian Defense Minister Sergei Shoigu said in June that aerial drones being developed in Russia for the military were inferior to similar foreign models. Russia has reportedly signed two UAS contracts with Israel. Under the first contract, signed in April 2009, Israel delivered two Bird Eye 400 systems (worth $4 million), eight I View MK150 tactical UAVs ($37 million) and two Searcher Mk II multi-mission UAVs ($12 million). The second contract was for the purchase of 36 UASs, worth a total of $100 million, was due for delivery in 2010. The shipment, however, has not been confirmed by the Russian Defense Ministry.

ADCOM Systems, a group of firms headquartered in Abu Dhabi, specializes in manufacturing UAS, aerial targets, air traffic control radar systems, and advanced communication systems. It is unclear what are the drivers for the Russian decision to buy the new drone. United 40 is the first large drone developed by ADCM and in its current state the drone is far from operational or relevant for learning lessons the Russians don’t already know.