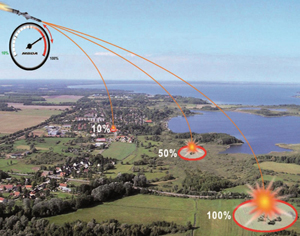 Engineers at TDW GmbH have developed a new effector technology with which armed forces can achieve scalable target-adapted effectiveness. The new capability was recently demonstrated on the grounds of Bundeswehr Technical Centre 91 (WTD 91) in Meppen, using 100 kg of explosive packed into a Mk82 shell configured with the newly developed scalable warhead. The effect of the tested warhead was comparable to the effect of 10 kg of high explosive. The purpose of the test was to evaluate how the effective reduce of the scalable weapon could be reduced, without changing the explosive weight or weapon casing. Such a capability would be useful when engaging targets over a wide target set, while, at the same time, minimising the damage to nearby buildings and vehicles.

The scalable effect is based on detonating pre-selectable proportion of the explosive contained inside the weapon, an amount sufficient to meet the effect requirement. The remainder is prevented from detonating, and is modified through the explosion to ensure that no hazardous residual explosive remains after the bomb explodes.

“We’ve been working for some years on technological approaches to solving this problem. We’ve now demonstrated that this technology actually works. This success is another step forward in the flexibility of advanced future effectors,” says Helmut Hederer, Managing Director of TDW GmbH. The subsidiary of MBDA Deutschland is the first company to successfully demonstrate this technology in a series of tests.

Missions in asymmetrical scenarios call for high precision and a warhead with an effectiveness accurately adapted to the type of target. With present-day effector systems, this is possible either by carrying different loads of weapons, or carrying weapons with reduced effects.

An answer to this challenge is available in the form of effector systems that are capable of “scalable” effectiveness. Scalable means that the type and magnitude of the intended effect would be adjustable by the pilot or weapon systems operator in the cockpit prior to the weapon’s release. The advantages of so called “dial-a-yield” capability would greatly improve the operational flexibility of airpower while reducing the risk of collateral damage or risk to nearby friendly forces.

The test provided a proof of concept for the proving the maturity of the scalable warhead concept and its integration into existing effector systems (bomb casing). According to TDW, this warhead technology could enhance existing weapons such as precision guided bombs or missiles, employed with aerial and naval weapon systems. As MBDA’s warhead specialist, TDW has developed and manufactured warheads for several air-to-ground missiles, including the Mephisto, used with the Taurus KEPD 350 cruise missile. Other TDW warheads were also integrated in the Norwegian NSM and ALARM missiles. Other advanced developments included intelligent explosive charges with directional effect, insensitive munitions (IM) and advanced fusing systems. 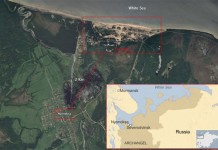