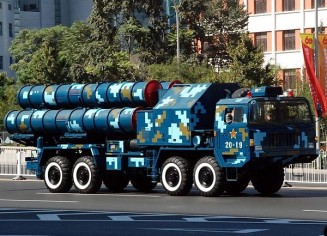 Ankara has selected China’s missile developer CPMIEC to deliver the strategic US$3.44 billion missile defense shield for Turkey. China’s Precision Machinery Import Export Company (CPIMEC) was selected a winer on an international tender, The winning Chinese FD-2000 system beat the Patriot, the Russian S-400 and the French-Italian Eurosam Samp-T. The Turkish defense minister announced the decision to award the contract in a statement on Thursday, September 26, 2013.

The Chinese company has beaten US, Russian and European competitors despite being restricted by sanctions. In February 2013 the United States announced sanctions on CPMIEC for violations of the Iran, North Korea and Syria Nonproliferation Act. NATO has deployed the U.S.-built Patriot air and missile defense system there since 2012.

Murad Bayar, head of the Undersecretariat for Defense Procurement, told the Hürriyet Daily News that full integration with NATO assets was an explicit condition in the contract for the planned air defense system. “As part of this program, a Turkish defense company will be tasked with integrating the air defense system into a network operated by the Turkish Air Force. That integration will mean integration with NATO assets, too, since the Turkish system is fully integrated with the NATO system,” Bayar said.

Bayar said the Chinese bid came in at $3.44 billion; the initial contract price was estimated at $4 billion. Under the program, dubbed T-LORAMIDS, Turkey will start contract negotiations with CPMIEC, the front-runner of the competition and, if these talked failed, with the Eurosam consortium, the second best offer according to a grading of bids. The U.S. Patriot system was ranked third. Bayar said the Russian option had been eliminated entirely.