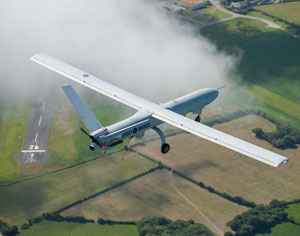 Thales UK yesterday announced that its Watchkeeper Unmanned Air System (UAS) has received a Statement of Type Design Assurance (STDA) from the UK’s Military Aviation Authority (MAA). This statement is a key component of the process that allows the UK’s Ministry of Defence (MOD) to continue towards the initial Release To Service (RTS), as it provides assurance that the air vehicle and its software have reached an acceptable level for design safety and integrity to meet the current stage of the system’s development. Watchkeeper is the first UAS to receive such an STDA from the MAA, and represents a major step forward for the acceptance of UASs in the airspace environment. This underpins military flying globally in appropriate airspace.

“The issue of a Statement of Type Design Assurance from the MAA is a major milestone for the Watchkeeper programme, and a first for a UAS programme in the UK” said Eddie Awang, Vice President of Intelligence, Surveillance & Reconnaissance at Thales UK. The MAA is the independent regulatory authority responsible for all aspects of military air safety, and was formed in 2010 following the recommendations of the Haddon-Cave report.

While most of the Watchkeeper systems have already been delivered, the fielding of the system has been delayed due to the limited availability and access to UK segregated airspace reserved for unmanned systems. Other systems have been affected as well – the MQ-9 Reaper Medium Altitude Long Endurance (MALE), Hermes 450 (Tactical UAS) and Desert Hawk (mini UAS) that have faithfully supporting British and coalition forces deployed in Afghanistan are often grounded as they return home, as they cannot fly in national controlled airspace, and are limited to few segregated areas and specific operational procedures.

With the establishment of National Aeronautical Centre (NAC) last month, creating a large airspace in West Wales reserved for unmanned systems, these areas have been widened. This airspace was created through a partnership between West Wales Airport and Newquay Cornwall Airport, enabling UAS to operate in UK civilian airspace, flying over extended range, in operations where drones can fly beyond visual line of sight from their controllers. The center is open to civilian and military contractors and operators.