Home Latest News Defense Business Washington Beef up the Gulf States with 10,000 Strike Weapons Worth US$10... 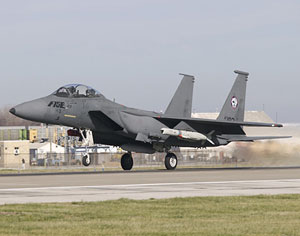 Saudi Arabia is seeking to acquire new strike weapons from the USA, to equip the fleet of new and modernized F-16SA strike fighters. According to notification to congress by the Defense Security Cooperation Agency, the total cost of missiles and associated equipment, parts, training and logistical support could sum up to US$6.8 billion. In December 2011 Saudi Arabia signed a letter of offer and acceptance (LOA) to purchase 84 new and 70 refurbished F-15SA multi-role fighter aircraft and associated weapons. The weapons included in this request are additional to that order. An additional request at a cost of four billion US$ was announced in parallel to the Saudi. This second request came from the United Arab Emirate, pertaining to armament acquisition for its F-16 Block 60 fighters.

The prime contractors associated with those programs are Boeing (GBU-39(B), AGM-84H and AGM-84L) and Raytheon (AGM-154, AWW-13). The two companies also shared the majority of multi-billion orders for the F-15SA and their integral (air/air and air/ground) weapons.