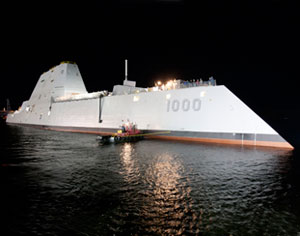 General Dynamics Bath Iron Works (BIW) successfully launched the Navy’s first Zumwalt-class destroyer Oct. 28 at their Bath, Maine shipyard. The future USS Zumwalt (DDG 1000) will be the lead ship of the Navy’s newest destroyer class, designed for littoral operations and land attack. At 610 feet (186 meter) long, and 15,610 (long) tons displacement, the Zumwalt looks unlike any ship the navy has sailed, with an angular superstructure, a low-slung “tumblehome” hull to “pierce” waves for a smoother ride, Other new provisions include electric propulsion and a futuristic bridge, that looks more like it belongs on Star Trek’s USS Enterprise than a real Navy ship.

The $4 billion warship, built by Bath Iron Works in Maine, was launched on the Kennebec River Monday, five years after construction began. The Zumwalt, hull number DDG-1000, was meant to be the first of a class to replace the DDG-51 Arleigh Burke-class destroyers. Rising construction costs caused caused the Pentagon to tack, limiting the program to just three Zumwalts. They are 100 feet longer than their predecessor, but require half the crew.

Because of the complexity of the first-of-class ship, the Navy will perform a two-phase delivery process. Bath Iron Works will deliver the ship itself to the Navy in late 2014. Upon delivery, the Navy will then conduct combat systems activation, tests and trials, to include multiple underway periods. The ship is expected to reach its initial operating capability in 2016. The BIW will deliver the USS Zumwalt in fall of 2015. DDG-1001, the USS Michael Monsoor, is scheduled for 2016 delivery, and the DDG-1002, USS Lyndon B. Johnson, is expected in 2018.

As one of the Defense Department’s largest acquisition organizations, PEO Ships, an affiliated PEO of the Naval Sea Systems Command, is responsible for executing the development and procurement of all major surface combatants, amphibious ships, special mission and support ships and special warfare craft.

The USS Zumwalt may be the biggest destroyer ever built for the Navy, but it should be the hardest to spot on radar. The shape of the superstructure and the arrangement of its antennas significantly reduce the ship’s radar cross section, making the ship less visible to enemy radar at sea. The design also allows for optimal manning with a standard crew size of 130 and an aviation detachment of 28 Sailors thereby decreasing lifecycle operations and support costs.

Construction began on DDG 1000 in February 2009, and the Navy and its industry partners have worked to mature the ship’s design and ready their industrial facilities to build this advanced surface combatant. Zumwalt is currently more than 87 percent complete, and the shipbuilder will continue remaining construction work on the hull prior to planned delivery late next year.

The lead ship and class are named in honor of former Chief of Naval Operations Adm. Elmo R. “Bud” Zumwalt Jr., who served as chief of naval operations from 1970-1974. The official christening of the ship was cancelled earlier this month. Originally scheduled for Oct. 19, the ceremony was postponed until a future date due to the US administration shutdown.