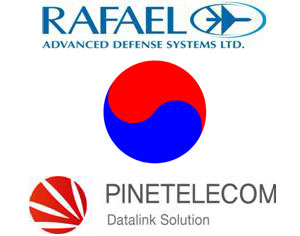 Rafael Advanced Defense Systems from israel and the South Korean Pine Telecom developer have reached an agreement for Rafael’s acquisition of 49% of PineTelecom shares. The two companies are already working together in the framework of several local defense programs and will now cooperate more closely in the development and manufacturing of C4I for the Korean market
and potentially for export. The two companies are aiming to develop and market high-end communications systems for the Korean military, and the minority ownership will enable Rafael to offer technology transfer to the jointly held establishment.

“This cooperation is another step forward in our efforts to grow into a system level second tier Communication Systems provider for the Korean and international defense markets, and realize the vision of becoming a leading defense industry, both domestically and internationally.” Mr. M.H. Yun, Owner of Pine Telecom stated. “This move has already contributed to a number of wins and successes in the Korean market, and will promote many more, for the mutual benefit of the two partners.” a source in RAFAEl told Defense-Update. It is suggested that e new acquisition will improve RAFAEL’s potential to win government orders, particularly in military and airborne communications, an activity considered a main growth market for the company. In recent years RAFAEL has expanded its C4I and networking portfolio, and is currently offering advanced network-centric systems such as the Binet Software Defined Network Enabled tactical radio, Tacmax wimax based network, datalinks and other network enabled capabilities.

As part of the agreement, Pine Telecom will continue to operate as an independent company with engineering and operational collaboration from Rafael, enabling PineTelecom to strengthen its competitiveness in the Korean and international defense communication market and continue offering comprehensive solutions and advanced systems to Korea’s and international defense communication market.

“Today’s signing marks our strong faith in PineTelecom’s role as a partner in the Korean market. PineTelecom, like Rafael, is a strong believer in the development of holistic systems, rather than individual components.” CEO of Rafael, VADM (ret.) Yedidia Yaari said, “With this common vision, we look forward to sharing our knowledge and expertise with PT. Our partnership will allow our companies to continue developing leading technologies and to explore new possibilities in the field of C4I. Our cooperation will be mutually-beneficial and will combine PineTelecom’s impressive experience in the development and manufacturing of communication systems with Rafael’s long-standing expertise in the field.”