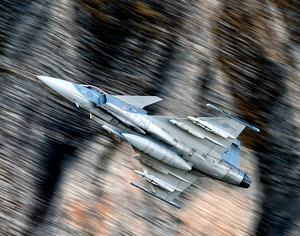 After more than ten years of discussion, President Dilma Rousseff decided the purchase of Gripen NG fighter, the Swedish Saab, for the FAB (Brazilian Air Force) for the FX-2 program. The defense minister, Celso Amorim, and Air Force commander, Brigadier Juniti Saito, yesterday announced the acquisition of fighter jets. According to the Brazilian plan the investment is US$ 4.5 billion, to be paid over a disbursement schedule through 2023. The first aircraft is expected to arrive around 2018 – approximately 48 months after the financing agreement is signed – which is expected to occur in December 2014. Four years ago Saab has offered the same package for US$6 billion,. Folha de S.Paolo wrote.

According to Minister Amorim, the Swedish fighter was chosen for the government’s F-X2 program for technical reasons. “The choice was the object of much study and careful consideration, and took into account performance, effective technology transfer and costs, both for acquisition and maintenance. The choice was based on these three factors,” said the Minister.

‘Gripen E’, as the Gripen NG’ is now designated, is the latest production version of the Swedish JAS-39 fighter. The aircraft offers significant performance improvements compared to previous versions, including a stronger engine, longer range, more weapons, new electronic radar and more advanced avionics. If Brazil procures the Gripen system it will be joining the countries operating the Gripen System today: Sweden, South Africa, Czech Republic, Hungary and Thailand. In addition, The Empire Test Pilot School (ETPS) in the UK uses Gripen in its training programme for future test pilots. Of all these, only Sweden has formally committed to the Gripen E acquisition. During August and September 2013 both chambers of the Swiss Parliament voted yes to the procurement of Gripen. A referendum on the procurement is expected in 2014. If contract negotiations are successful, Brazil will become the third nation to operate the advanced version.

The decision, according to Brigadier Juniti Saito, was also influenced by the offset rates offered by the Saab bid, as determined by the National Defense Strategy (END). “We have several industries that have offered to contribute to the development of the fighter. At the end of its development, we will have access to all the technology used by the aircraft,” said the Commander of Brazil’s Air Force. According to Saab, the offer presented to the Brazilian Government by Saab includes Gripen NG, subsystems for Gripen NG, an extensive technology transfer package, a financing package as well as long term bilateral collaboration between the Brazilian and Swedish Governments.

”I am extremely proud of the confidence that the Brazilian government has placed in Gripen NG. Saab regards the announcement today as a strong commitment of the Brazilian Government and we are looking forward to provide the Brazilian Air Force with the world-leading and most affordable fighter. Furthermore, this announcement is very significant for the collaboration between Brazil and Sweden. We stand prepared to start the industrial collaboration as planned, with its positive effects for Brazilian industry”, says Saab CEO Håkan Buskhe. After finalized negotiations an agreement can be reached between Saab and Brazil and an order for Gripen NG placed, the company said.

Gripen NG began by Saab as an industry initiative, a move which was instrumental in winning new business in Switzerland and Brazil. The Gripen NG or Gripen E as it is formally designated – is now fully supported by the Swedish ministry of defense;

“We continue to build on the success of Gripen. Gripen is unique in its ability to combine high technology and performance with cost efficiency and we note a strong interest for Gripen on the export market,” says Lennart Sindahl, Deputy CEO and head of Saab’s business area Aeronautics. “The major performance improvements we are now performing will establish Gripen E as the fighter aircraft of the future – both for Sweden and for other countries. Our existing customers that operate the Gripen C/D version will also be able to take advantage of some of the development in their future upgrades.”

The Swedish Air Force is planning to modernize its first line aircraft fleet with the remanufacturing of current Gripen C variants into the next generation Gripen E. Saab announced this week it has received an order amounting SEK 16.4 billion (US$213 million) for serial production of the new variants. Since February 2013 Saab has received three orders under the Gripen E agreement with Swedish Defence Materiel Administration (FMV). These include the development program, spanning through 2013, the delivery of 22 new Gripen E to Switzerland (a formal contract is expected in 2014) and the modification of 60 Gripen C into Gripen E models, with initial deliveries in 2018.

In addition to the platform development, Saab has also received an award for the integration of the Meteor Air/Air weapon system on the aircraft, under an order worth SEK 186 million (US$28 million), sustaining the integration activities through 2026.

Meteor is a Beyond Visual Range Air-to-Air Missile (BVRAAM) developed to enable engagement of airborne targets at long distances. The missile is the result of a European collaborative project involving Sweden, France, Italy, Spain, Germany and Great Britain. At the end of June 2013 Saab in cooperation with FMV conducted the first test firing of the serial production configuration of Meteor. Gripen was thereby the first combat fighter system in the world with the capability to fire this version of Meteor that has been developed for Gripen, Eurofigther and Rafale.

In 2000, the FX project defined the need to equip the FAB with aircrafts of air defense and air superiority capabilities compatible to the geopolitical relevance of Brazil. The FX program was the result of studies initiated in 1992, when the FAB determined the initial requirements of the aircraft that would replace the F-103 Mirage III (which had been in use in the Anápolis (GO) Air Base since the early 70s).

2001: Brazilian Air Force Command initiates the selection of bidders for equipment compatible with the established requirements. At the end of the year, aircraft models Gripen, F-16, Mig-29, Mirage 2000 and Sukoi 30 are short-listed as potential purchases.

2003: The bidding process is suspended by the federal government at the beginning of the year, and then reestablished later in October.

2004: With the deadline for the submission of bids not until December, the government filled the gap created by the decommissioning of the F-103 Mirage III (planned for 2005) by purchasing 12 used Mirage 2000-C from the French Air Force.

2007: The Office of the Chief of Staff of the Air Force resumed its study of the operational needs and characteristics required of the new multi-mission fighters planned for purchase.

2008: The FAB creates the F-X2 Project Management Committee, responsible for overseeing processes related to the acquisition, including directly choosing the new aircraft. At the end of that year, three aircraft were “short-listed” to proceed through the acquisition: Boeing (F-18 E/F Superhornet), Dassault (Rafale) and Saab (Gripen NG). The selection took into account operational, logistical and technical aspects, as well as the offset rates and technology transfer offered to Brazil’s domestic industry.

2009: The three finalists submitted their proposals for the final selection.

2010: In January, the Air Force Command submitted the Final F-X2 Project Report to Brazil’s Ministry of Defense. The primary purpose of the Report was to assist the federal government in making its final purchase decision.

2013: Supported by the President of the Republic, Minister of Defense Celso Amorim and Commander of the Air Force Brigadier Juniti Saito announced the decision to acquire the Gripen NG aircraft from Swedish company Saab, thus ending the selection of suppliers for the F-X2 Program.