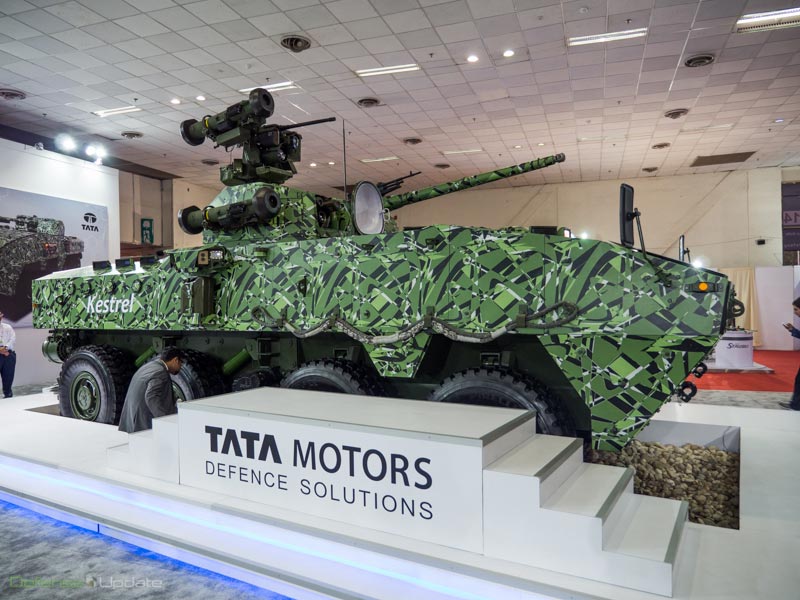 As part of TATA’S strategy to enhance the scope of its defense business Tata Motors HAS showcased the ‘Kestrel’, an 8×8 wheeled armored amphibious vehicle platform providing protected mobility and firepower to the troops.

TAT Motors unveiled at Defexpo 2014 an 8×8 Amphibious Armored Fighting Vehicle and (AFV) and 4×4 Light Armoured High Mobility Vehicle (LAMV), functioning as a recon scout vehicle. The LAMV would be moving ahead of the armored columns providing scout and recce missions. The vehicle was designed by the Indian Defence Research and Development Organisation (DRDO). Supacat of the UK, an expert in tactical armored vehicles, has also provided vital reconnaissance, mobility, protection and firepower support.

Kestrel weighs 22.5-26 tons (according to configuration)and is powered by a 600HP diesel engine. It has a maximum capacity to carry 12 soldiers. It can carry up to 10 troops and a crew of two. The two front axles are steerable, giving the vehicle a 19 meter turn radius. All tires have runflat capability with central inflation (CTIS) as standard. The amphibious propulsion employs rear mounted waterjet which does not require preparation before entering into water.

The crew compartment is protected to Stanag I to Stanag IV level, depending on the application. The monocoque is comprised of welded armor steel hull with armor applique and inner composite spall liner. The protection modules can be replaced in the field, increasing or decreasing protection level per mission requirement. The belly has a blast guard withstanding blasts up to STANAG III level. The vehicle is equipped with NBC protection and filtering for uninterrupted operation under CBRN conditions.

Troop  seats are equipped with energy attenuating mechanism, protecting the troops and crew-members from blast effect. The seats are arranged back to back, enabling the use of firing ports and opening hatches. The vehicle can travel at a speed of 100 km/h on land and 10 km/h in water.

The LAMV uses a 4×4 platform designed for off-road mobility. The 8 ton gross vehicle weight (GVW) vehicle is powered by watercooled, turbocharged Intercooler BS IV diesel engine coupled to a automatic transmission, delivering high power-to-weight ratio for mountain terrains. LAMV   uses independent suspension enabling better traverse over rough terrain. All tires have runflat capability with central inflation (CTIS) as standard. On road the vehicle can reach a to speed of up to 105 km/h. For its missions, LAMV can accommodate different weapon stations and payloads.

The LAMV is designed to carry payloads of up to 1.5 tons. It can accommodate different variety of armor, weapon stations and turrets as the application demands. It has an integrated blast and ballistic protection, including blast deflecting V-hull and an armor protected. The armored pod is tiltable sidewise, for better serviceability.It offers maximum survivability in  high threat environments due to its ballistic hull design, special armor protection and high mobility. The basic protection level for ballistic and blast is STANAG II.

LAMV can carry four troops, accessing the vehicle through side doors on both sides. The vehicle can be configured with a weapon station and cameras, for security or armed scout missions. In the scout version the LAMV will carry four troops in addition to the two men crew. The fuel tanks are placed outside the crew compartment for additional safety.