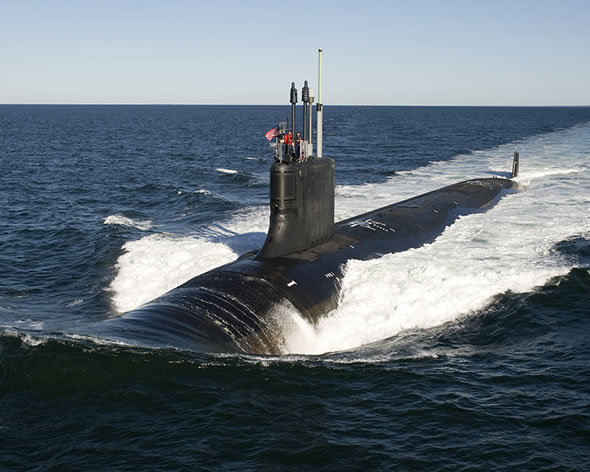 “The Navy and shipbuilders worked together to produce a contract that is both fair to the Navy and industry,” Johnson said. “This contract lowers the per-ship cost compared to Block III.” Johnson said the contract would also reduce the number of major maintenance visits for the submarines to three from four, which meant that each of the new subs would be able to carry out 15 full-length deployments instead of 14.

“With the decrease in cost and the increase in capability, we are essentially getting more for less,” he said.

The Navy is already operating 10 Virginia-class submarines, with eight more submarines from the third block under contract.

The order secures submarine building work at the prime contractor General Dynamics Electric Boat and chief subcontractor Huntington Ingalls Newport News Shipbuilding for the next four years, at a pace of two submarines per year. Each yard will deliver one sub per year.

And the largest number of boats ordered to date in a single contract block. The Block IV award covers hull numbers SSN 792 through SSN 801. None of the ships have yet been named. SSN 792 is funded in fiscal 2014. Construction of SSN 792, Electric Boat said, will begin May 1. SSN 801 is scheduled to be delivered to the fleet in 2023.

Ten Virginia-class submarines already have been delivered and are in service, while another eight are under construction or on order. The North Dakota, first of the Block III group, is to be delivered this summer.

Each submarine displaces 7,800 tons submerged, with a hull length of 377 feet and diameter of 34 feet. They are listed as “capable” of speeds greater than 25 knots with a diving depth greater than 800 feet, while carrying Mark 48 advanced capability torpedoes, Tomahawk land-attack missiles and unmanned underwater vehicles.