Recent commercial satellite imagery indicates that North Korea is conducting a number of significant activities at the Sohae Satellite Launching Station (“Tongchang-ri”) related to the development of larger space launch vehicles (SLVs) and long-range ballistic missiles. 38North reports. Click on the images to access the larger versions shown on the 38North website:

One and maybe more engine tests of what is probably the first stage of a KN-08 road-mobile intercontinental ballistic missile (ICBM) were conducted in late March/early April 2014. With this latest activity, three KN-08 rocket engine test series have been identified for the first and possibly second stages dating back to mid 2013. As this effort progresses, the next technically logical step in the missile’s development would be a flight test of the entire system.

Continued modification of the gantry previously used to launch the Unha SLV intended to enable it to launch larger rockets of up to 50 meters in height. Construction may not be completed until early summer, effectively preventing a launch from the facility in the meantime.

New construction of what appears to be a circular structure with a diameter of about 40 meters and multiple interior walls. The purpose of the project—which has progressed rapidly over the past month, indicating a high priority — remains unclear, although the possibility that it is a new launch pad cannot be ruled out.

The report on the engine testing comes a week after the 38North reported heightened activities at the North’s nuclear test site at Punggye-ri, indicating it was ready to conduct a fourth nuclear test.

The KN-08 missile currently in development in North Korea has already appeared in military displays but has yet to be tested in flight. It is believed to have a range of more than 10,000 km (6,000 miles). 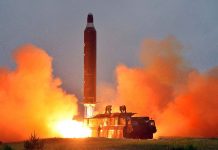