The recent AMAS 2nd Capabilities Advanced Demonstration (CAD II) was built upon the capabilities that were demonstrated at Ft. Hood, Texas, in January 2014, where three unmanned military trucks negotiated oncoming traffic, followed rules of the road, recognized pedestrians and avoided various obstacles at speeds up to 25 mph in an urban environment.

“I would describe these tests as a successful demonstration of the maturing capabilities of AMAS technology,” said David Simon, AMAS program manager for Lockheed Martin Missiles and Fire Control. “We will conduct further safety testing within the next month, and the program will execute a six-week Operational Demonstration in the July-August timeframe, during which time Soldiers and Marines will assess the system benefits in realistic convoy operations.”

The AMAS hardware and software are designed to automate the driving task on current tactical vehicles. The Unmanned Mission Module part of AMAS, which includes a high-performance LIDAR sensor, and additional algorithms, is installed as a kit and can be used on virtually any military vehicle. The goal of the program is to standardize these kits across the Army and Marine Corps, providing the warfighter the ability to transform ordinary vehicles into optionally-manned vehicles by 2020.

Autonomy-enabled vehicles will reduce accidents while augmenting the warfighter and increasing capabilities by creating greater stand-off distance from danger. The Army considers the operation of driverless trucks would make supply distribution safer and more efficient, providing the flexibility to adapt to ever-changing and evolving threats. 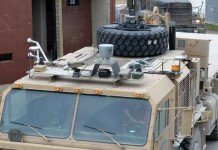 Convoys of Driverless Trucks to Push Supplies to the Combat Zone