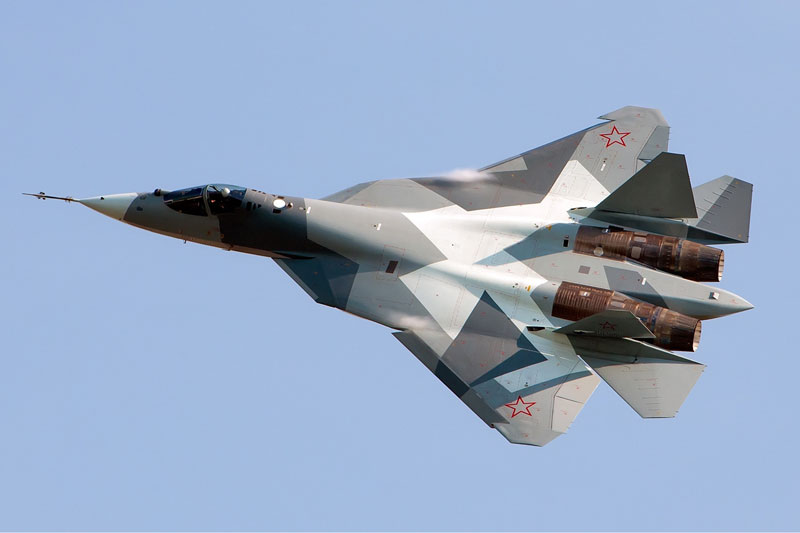 Despite Delhi’s concerns over its workshare in the $11 billion developmental engineering phase, India’s Hindustan Aeronautics Limited (HAL) is soon due to increase its investment in the Perspective Multi-Role Fighter (PMF), the next generation stealth fighter for the Indian air force, pursuing the follow-on developmental engineering phase. As part of this investment HAL will be required to establish the production infrastructure to build one of two prototypes and conduct flight testing toward the end of the decade. According to plans, the domestic production is slated to begin in 2020. With the contract signed, this unprecedented cooperative development program will take almost eight years to complete.

“This is a unique project aiming at long-term cooperation” Alexander Klementyev, Sukhoi deputy director general said, “we have never had such a format of cooperation before. There used to be licensed production in China and in India, but now it will be joint designing and production of a new combat aircraft.”

In contrast to the Russian enthusiasm, the Indians are somewhat sceptical about the future. According to recent articles in the local media, India has complained about lack of transparency from the Russian side, as Moscow is not meeting its obligations of technology sharing in the current pre-developmental phase of the Fifth Generation Fighter Aircraft (FGFA). The preliminary design phase was completed in 2013, under a collaborative investment split between India and Russia. However, Indian officials have complained that although they paid for half of the program the Indians are moderated out of the program.

As 5th generation aircraft the PAK-FA and PMF will use highly advanced composite materials and special airframe coating to maintain low radar signature and low weight. The powerplant will also get unique shields of exotic materials to reduce infrared observability. The Russians insist that these requirements will demand unique manufacturing capabilities that do not currently exist in India.

But these advanced technologies are kept close to the chest of the Russians. The Indians suspects the Russians seek to further erode the partnership into a financial partnership rather than a technological collaboration. Circles at the Indian Air Force claim that HAL has not been persistent enough in the negotiations, to secure Indian work share in the program. They claim the Indian contribution through HAL will be minor – tyres, basic navigational instrument VOR-DME, coolant for the radar, laser designation pod and heads-up display. Even within the agreed 13 per cent work share, the actual indigenous items will be in single digits and the rest will be procured from abroad. “The complex negotiations and urgency of deployment means that HAL could settle for much less work than initially agreed upon,” air force officials stated, placing the IAF in precisely the sort of position it is looking to avoid: total dependence on Russia for yet another frontline platform.

Indian sources claim their engineers are moderated from the program, as Moscow is not keen to share technical details about its next generation stealth fighter, on which the Indian version will be based. Indian pilots are not allowed to fly the aircraft either. The Russians claim foreign pilots are barred from flying in their airspace, although this issue has not prevented Indians to fly MiG-29s and Su-30s in the past…

In the absence of formal developmental engineering contract, the Russians are keeping the Indians as financial partners but do not provide access to the technological side of the program. To date no PAK-FA has left Russian territory. The Russians don’t allow foreign pilots to come near the aircraft. The first prototype is scheduled to begin testing in India in 2015.

Prior to the contract negotiations, through the preliminary design discussions the Indian side raised questions about maintenance issues, the engine, stealth features, weapon carriage system, safety and reliability. The Indian Air Force has also expressed concern about the engine of the new fighter – the current design uses the powerplant used on the Sukhoi-30, but India is seeking a more powerful engine. A change has been promised at an additional cost. Sources said there could not be any progress until these issues were resolved.

Part of the Russian reservation about work sharing in the PAK-FA program is the urgency they view the development, particularly with the Chinese and US competitors. According to the Russian Air Force Commander, Lieutenant General Viktor Bondarev, the first T-50 is scheduled for delivery to the Russian Air Force in 2016, to follow with serial deliveries through the 2020s. According to Bondarev, Air Force pilots have already started flights on the first plane at Akhtubinsk, soon to be joined by a second one soon.

Five prototypes were currently participating in the test and certification work, which is due to conclude in 2015, ahead of first delivery envisioned for 2016. In parallel with the flight test programme the company is also preparing the final assembly line at the KnAAPO plant in Komsomolsk-on-Amur for serial production.