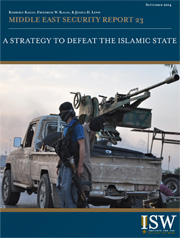 “An intervention in the Middle east fighting and defeating ISIS in its strongholds throughout Iraq and Syria will require a significant commitment of U.S. forces,” analysts at the Institute for the Studies of War say, “perhaps as many as 25,000 ground troops in all in Iraq and Syria”. Although in roles very different from those they played in Iraq between 2003 and 2011, the decisive effort will require primarily teams of Special Forces and special mission units, deployed in a dispersed footprint throughout the Sunni lands, as well as advising the Iraqi Security Forces and the moderate Syrian opposition. “Those forces will likely number in the low thousands.” the analysts said in their recent report “Strategy to Defeat ISIS” edited by the ISW institute experts Kimberly Kagan, Frederick W. Kagan, & Jessica D. Lewis.

The dispersed footprint from which they will have to operate requires the support of at least a U.S. Army Combat Aviation Brigade (about 3,300 soldiers) to operate transport, reconnaissance, and attack helicopters. “These special operators will be at high risk of locally-overwhelming enemy force, as well as attacks by ISIS operatives infiltrating the tribes and even the security forces among whom they will be living.” the report recommends these forces should have access to a large and responsive quick reaction force (QRF) that can get to threatened units rapidly and with dominating force.

“We estimate that two battalion-sized QRFs will need to be available at all times, one in Iraq and one in Syria. Sustaining the availability of two battalions requires the deployment of two brigades, perhaps 7,000 soldiers in all.” Additional forces will be required to secure temporary bases, provide MEDEVAC coverage, and support necessary enablers. Flight times and the MEDEVAC requirements to get wounded soldiers to help within the “golden hour” dictate that the U.S. will have to establish temporary bases inside Iraq and Syria. Bases in Kurdistan, Turkey, and Jordan are simply too far away from the core ISIS safe-havens along the Euphrates.

“The U.S. should adopt this strategy despite its risks”

Their report outlines only the first phase of the proposed strategy. Subsequent phases depend entirely on validating the assumption that the Sunni Arab communities in Iraq and Syria are both willing and able to fight alongside the U.S. and our partners against ISIS. The details of those phases will depend on which specific tribes and groups step forward and what their capabilities and limitations might be. They will also depend on the speed with which the ISF can be rebuilt and reformed into a non-sectarian and effective security force. The first phase itself will take months. Subsequent phases will take longer.

Adopting this strategy entails signing up for a prolonged deployment of military forces, including ground forces.

Even then, this strategy suffers from the high risk of failure and the near-certainty that the U.S. will suffer casualties, including at the hands of supposedly friendly forces. American troops dispersed among the Sunni population are at risk of being kidnapped. The significant anti-aircraft capabilities of ISIS put American helicopters at risk. It may turn out that the Sunni Arabs cannot or will not fight with us, finally, and that the overall strategy proposed here is infeasible. In that case, it will be necessary to abandon this strategy and reconsider our options.

“The U.S. should adopt this strategy despite these risks.” the ISW analysts recommend, “the consequences of inaction or inadequate action are evident: ISIS will retain control of much of the territory it holds, sectarian war will escalate, more foreign fighters including Americans and Europeans will cycle through the battlefield and get both trained and further radicalized, and al-Qaeda will benefit from the largest and richest safe-haven it has ever known. It is worth accepting the risks of this strategy to avoid this outcome.”

“The Islamic State poses a grave danger to the United States and its allies in the Middle East and around the world due to its location, resources, the skill and determination of its leaders and fighters, and its demonstrated lethality compared to other al Qaeda-like groups.”

In Syria, the Assad regime has lost control of the majority of the state, and the regime’s atrocities and sectarianism have fuelled violent Islamists, particularly ISIS and Jabhat al-Nusra (JN).

In Iraq, the government has lost control over large portions of territory that the Iraqi Security Forces and Kurdish Peshmerga are incapable of retaking without significant foreign support.

The Sunni Arabs of Iraq and Syria are the decisive human terrain. Al-Qaeda and similar groups can only flourish in distressed Sunni communities. Any strategy to counter al-Qaeda requires working with these communities, as the U.S. and the Iraqi government did during the Awakening in 2007.

Having neglected Iraq and Syria, the U.S. currently lacks the basic intelligence and contextual understanding to build a strategy. The U.S. must adopt an iterative approach that tests assumptions, enriches understanding, builds partnerships with willing Sunni Arabs, and sets conditions for more decisive operations.

Four Strategic Objectives for the Region:

Reconnoiter the human terrain to identify potential acceptable local partners and develop relationships with them. Prevent the ISF from eroding further and understand its command and control, particularly with respect to external actors, including Iran.

Politically, the U.S. must use its leverage to continue to shape the emerging Iraqi government to be as inclusive and non-sectarian as possible.

The U.S. must also engage in developing an inclusive government-in-waiting in Syria, unifying the ‘Alawite community with other minority groups that can work with moderate Sunni leaders.

The full report is available at the UnderstandingWar.org website.

The Institute for the Study of War (ISW) is a non-partisan, non-profit, public policy research organization. ISW advances an informed understanding of military affairs through reliable research,trusted analysis, and innovative education. ISW is committed to improving the nation’s ability to execute military operations and respond to emerging threats in order to achieve U.S. strategic objectives.