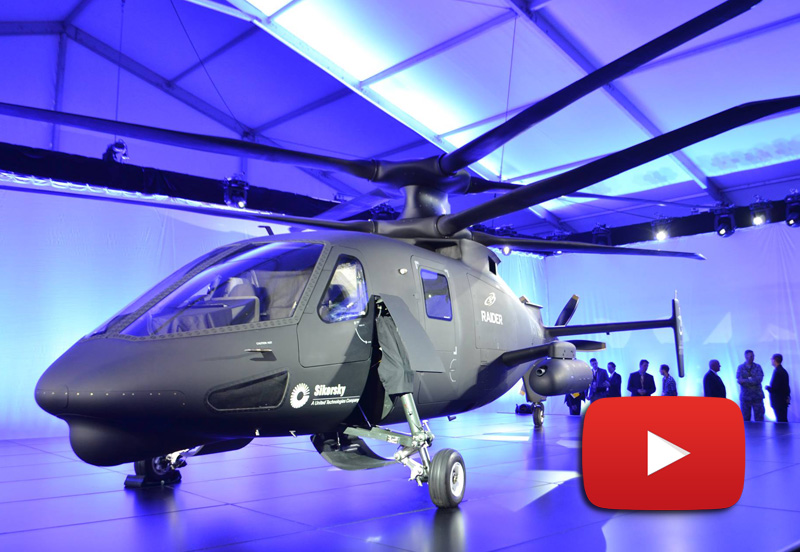 Based on Sikorsky’s rigid X2 rotor coaxial design, the S-97 RAIDER helicopter features next-generation technologies in a multi-mission configuration (armed aerial scout or light assault), capable of carrying six troops and external weapons. The coaxial counter-rotating main rotors and pusher propeller provide cruise speeds up to 220 knots (253 mph), more than double the speed of conventional helicopters. Sikorsky will offer the RAIDER™ aircraft as a replacement for the U.S. Army’s OH-58D Kiowa Warrior helicopter fleet based on the Army’s future operational and financial priorities, and for the special operations platform.

“Today, Sikorsky unveiled the next generation of military rotorcraft, with capabilities and performance never seen before in our industry,” said Sikorsky President Mick Maurer. “Just four years ago, we announced plans to build the S-97 RAIDER and teamed with some of the best companies in the industry, understanding the need to ensure aircraft development would not falter as government defense budgets shrank in response to economic pressures. Sikorsky is proud of its leadership in this area, and of the leadership the S-97 RAIDER represents among the world’s military rotorcraft.”

The single-engine RAIDER features a composite airframe and a maximum gross weight of slightly more than 11,000 lbs. The aircraft will be capable of carrying an array of weapons and sensors, necessary for the mission. The cockpit will fit two pilots, seated side-by-side. The flexible cabin space will carry up to six combat-equipped troops, or additional fuel and ammunition for extended missions.

The airframe is designed and built by Aurora Flight Sciences. Since joining the program in 2011 as the design and build partner for the complete fuselage and empennage, Aurora based its work on Sikorsky’s concept design, conducting preliminary and detail design and analysis culminating in the Critical Design Review in August 2012. Aurora delivered the first fuselage assembly and tested beyond critical flight loads in September 2013 in support of Sikorsky’s aggressive development timeline.

The S-97 RAIDER airframe, fabricated in Bridgeport, West Virginia, is 70% composite (by weight) and comprised of over 1,000 custom detail components in six major primary and secondary structure assemblies.

“RAIDER marks the first unveiling of a new relevant rotorcraft configuration in 30 years,” said Mark Miller, Vice President of Research & Engineering. “With the RAIDER program, Sikorsky has brought innovation to every aspect of the process, rethinking the way we design, build, test and support the product. We’ve kept a close eye on lowering development, production and support costs while increasing productivity and quality, and we are confident that the RAIDER is the solution for the future warfighter. We are looking forward to getting air under its tires and expanding the envelope in flight test in the coming months.”

Aurora Tailors an Unmanned Flight Suite for the Huey