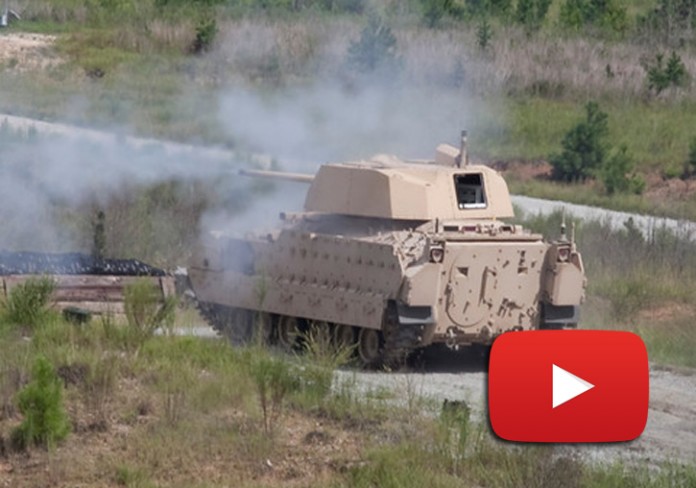 The XM813 is a 30mm medium caliber cannon delivers optimized effects against personnel in the open or behind cover, as well as behind walls. The cannon feeds ammunition with multi-purpose fuse that provides AirBurst effects (AB), Point Detonate Delay (PDD), and Point Detonate (PD) in one warhead. It can also provide optimized effects against light armored vehicles, with the Kinetic Energy (KE) penetrator.

“The lethality this provides a fighting vehicle and the dismounted Infantry in a dismounted Infantry support role is dramatic,” Lt. Col. Scott DeBolt, chief of Mounted Requirements Division’s Heavy Systems Branch, said. The Bradley Fighting Vehicle and fired a series of three engagements at approximately 1,400 to 1,500 meters from the target.

“The primary game changer is the accuracy of the fire control system,” DeBolt said. “It allows you to kill targets at ranges with shorter bursts. It additionally provides an airburst capability that allows us to engage targets in defilade, targets in the open, and allows us to have more target effect. You actually get kills against targets that we would currently be doing suppression against.” In addition to the increased lethality, the XM813 is also a more accurate weapon, according to ARDEC officials.

As a weapon system the cannon is flexible and can be fitted to a multitude of platforms, both turreted and RWS. The XM813 is an electrically driven, chain operated, dual-feed weapon system. It has first round select capability, and fires a suite of 30mm linkless ammunition.

“Compared to the M242, we have been able to improve the weapon system to the point where we can show a significant decrease in the number of rounds that will be required in order to defeat your target,” said Jeffery Hart, ARDEC’s chief of medium weapons. “We’ve done studies that show that, and that is the reason why we invested in improvements to the barrel and the recoil. In effect, it can fire two or three rounds instead of 10 to meet your requirements.”

The XM813 is an improvement of the 30mm MK 44 gun developed for the Future Combat Systems (FCS) Program, and is a part of the broader Advanced Lethality and Accuracy System for Medium Caliber (ALAS-MC) Program that was developed by the Army’s Armament Research, Development and Engineering Center (ARDEC) in support of Program Management – Ground Combat Vehicle (PM-GCV).

According to the Army, the program’s goals are to are to achieve enhanced lethality in a medium caliber weapon system, meet the GCV IFV Primary Armament Objective requirements, and to support threshold requirements while simultaneously developing a system with growth integrated to meet future threats. Such objective system is likely be a 50mm cannon

While the demonstration featured the XM813 on a Bradley, the potential exists for the system to be mounted on other combat vehicles.

“The lethality and the capabilities lend themselves to integration if the Army decided to upgrade the lethality on the Bradley, move to a future fighting vehicle or upgrade lethality on a Stryker,” DeBolt said. “There’s a lot of opportunity with the potential of a common caliber solution across the fleet of vehicles we currently control at Fort Benning.”

ARDEC is developing the system under the Advanced Lethality and Accuracy System for Medium Caliber program, and the XM813 has letters of endorsement from both Lt. Gen. H. R. McMaster, director of the Army Capabilities and Integration Center and deputy commanding general, Futures, Training and Doctrine Command, and Lt. Gen. Keith Walker, who formerly held the same position.

Tamir Eshel - Jun 21, 2021
0
Israel’s Ministry of Defense (IMOD) has recently completed a series of tests in which an airborne, high-power laser weapon system (HPL-WS) prototype intercepted multiple aerial targets in quick succession. The objective HPL-WS will be able to augment Counter Rocket, Artillery, and Mortar (C-RAM) capabilities such as the Iron Dome. By destroying enemy rockets at a much lower cost per kill.