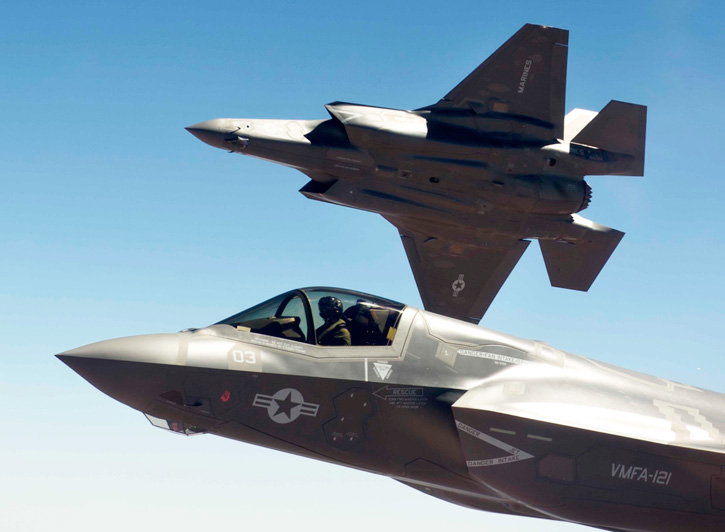 The U.S. Department of Defense and Lockheed Martin have reached an agreement in principle for the production of 43 F-35 Lightning II joint strike fighter (JSF) aircraft. Officials anticipate the Low-Rate Initial Production lot 8 (LRIP 8) contract to be finalized in the coming weeks. The contract covers fiscal year 2014, with deliveries beginning in 2016.

The LRIP 8 contract procures 29 U.S. aircraft including 19 F-35As, six F-35Bs and four F-35Cs. It also provides for the production of the first two F-35As for Israel, the first four F-35As for Japan along with two F-35As for Norway and two F-35As for Italy. The United Kingdom will receive four F-35Bs. The contract also funds manufacturing-support equipment as well as ancillary mission equipment.

Cost details will be released once the contract is finalized; however, in general, the average unit price for all three variants of the airframe in LRIP 8 is approximately 3.6 percent lower than the previous contract. Additional cost savings from the F-35 cost reduction initiative will begin to be implemented in the next batch of procurement – LRIP 9.

“Today’s agreement is representative of the program’s ongoing maturation,” said F-35 Program Executive Officer, Lt. Gen. Chris Bogdan. “Once production of LRIP 8 aircraft is completed, more than 200 F-35s will be in operation by eight nations. We are glad the Government and Lockheed Martin are completing a fair and reasonable contract for the 8th lot of aircraft.”

“Affordability is a key performance parameter in today’s challenging acquisition environment.” said Lockheed Martin F-35 Program General Manager Lorraine Martin. “Working together with our suppliers, we are making steady progress in reducing F-35 costs. While there will always be room for improvement, the results of the LRIP 8 negotiations and initiatives like the Blueprint for Affordability are indicative of our shared commitment to ensuring affordability.”

Launched earlier this year, Blueprint for Affordability aims to reduce the price of an F-35 5th generation fighter to the equivalent of today’s 4th generation fighters by the end of the decade. The initiative leverages upfront investments from key industry partners Lockheed Martin, BAE Systems and Northrop Grumman to drive down production costs. Cost savings from this initiative will begin in LRIP 9.

While the specific cost for LRIP-8 productions was not announced, the contract modification for the procurement of F135 powerplants for those jets has already been awarded as the Pentagon announced United Technologies Corp., Pratt & Whitney Military Engines, has being awarded $793 million for F135 propulsion systems under LRIP-8. The modification provides for the procurement of 38 F135-PW-100 for the U.S. Air Force, Navy and international partners and ten F135-PW-600 Short Take-off and Vertical Landing propulsion systems for the U.S. Marine Corps, and the UK.

The LRIP 8 aircraft order will join 166 F-35s contracted under LRIPs 1-7. As of October 24, 2014, 115 F-35s, including test aircraft, were delivered from Lockheed Martin’s production facility in Fort Worth, Texas. The U.S., eight Partner nations, and Foreign Military Sales participants have announced plans to procure more than 3,100 F-35 aircraft over the life of the program.

Israel and Japan are both expecting to receive their first F-35 aircraft in 2016. The first Israeli squadron of 19 aircraft will be based at IAF base in Nevatim, east of Beersheba. Israel is planning to buy another squadron of 25 aircraft toward the end of the decade bringing the number of F-35s it will operate to 44. Over the next decade the Israel Air Force is planning to operate 75 F-35s. Japan has ordered 42 F-35As which will replace 78 ageing F-4EJ/RF-4J Phantom II fighters being phased out of service.

The Four British aircraft will form the RAF first Lightning II operational unit in the UK. The UK has already taken delivery of three F-35B jets to date, which are based at Eglin Air Force Base in Florida, US, and an order was placed for a fourth UK aircraft in September 2013 which will be delivered early in 2016. These are for test and evaluation. The UK’s first operational Squadron will transition to RAF Marham in Norfolk in 2018, which will become their Main Operating Base.

“As the first batch order for aircraft to form part of our first operational squadron, this marks a very significant milestone in this programme.” RAF Air Commodore Mark Hopkins commented. Hopkins is the Senior Responsible Owner (SRO) for Lightning II procurement at the UK MOD. The aircraft provide an important step on the path to rebuilding the UK’s carrier strike capability. They feature short take off and vertical landing (STOVL) and the latest stealth and intelligence surveillance, target acquisition and reconnaissance (ISTAR) technology.