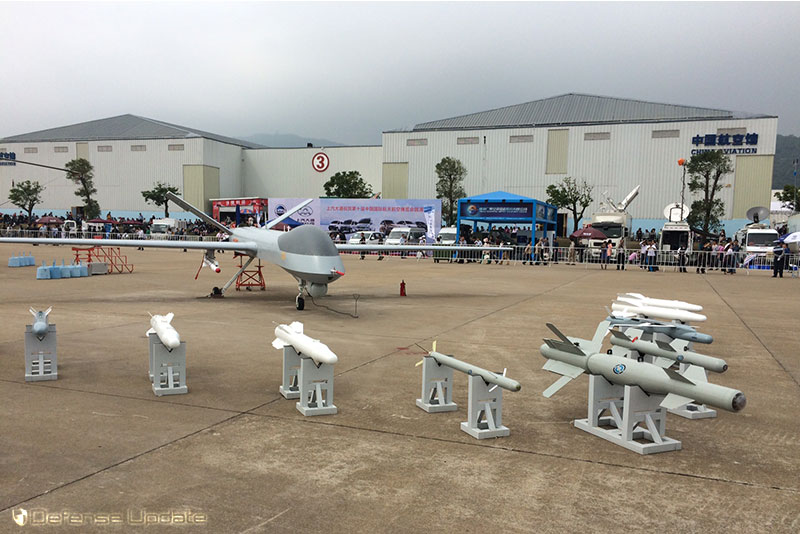 The Chinese Wing Loong I, a Chinese copy of the 1990s’ U.S. designed General Atomics Predator I UAV,  displayed at Airshow China with the Y-6M bomber at the background, itself a 30 year old Chinese copy of the Russian Tupolev Tu-16,bomber, designed in the 1960’s. While the drone carries much less in weight, and its destruction power is limited, in terms of precision and persistence it is far more effective than the bomber, carrying much heavier loads free fall bombs. The Y-6M was also displayed with a number of precision strike weapons, such as anti-ship missiles, stand-off, modular weapon container and EO guided missiles.

a line of guided weapons displayed by AVIC, including the LS/50 and LS/100 laser guided weapons, carried by unmanned aircraft and LS-6/250 and 500, extended range ‘glide bombs’ guided by satellite navigation. These two types are equipped with retractable wing kit extending their strike range. They are designed primarily for attack aircraft.

A range of air/air missiles displayed by AVIC is equipping China’s fighter jets as well as some air/ground systems. The missiles include heat seeking (infrared) variants, SD-10A medium-range radar guided air/air missiles and the LD-10 anti-radiation (anti-radar) missiles. The surface launched variants are the PL-9C SAM and SD-10A.