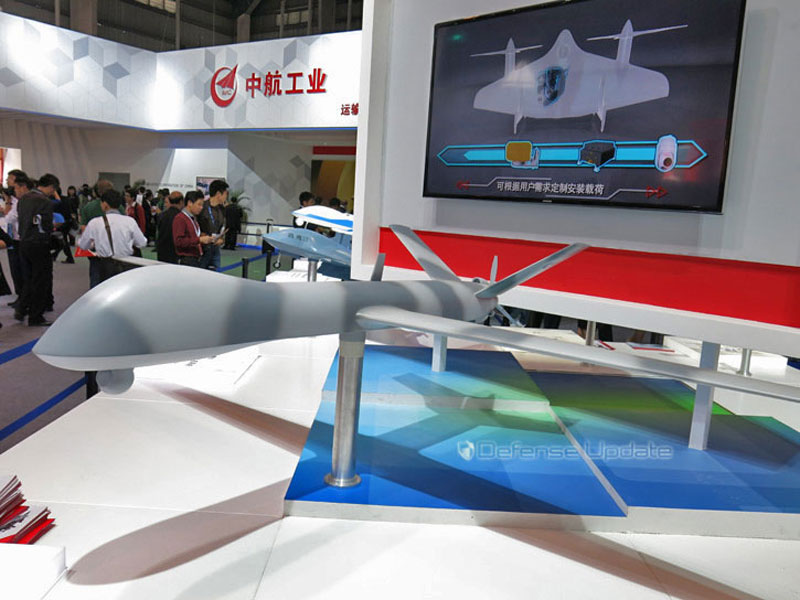 AVIC displayed a number of drones including a 1:6 model of the ‘Blue Fox’ high maneuverability jet powered drone, and the twin propeller driven Harrier III long endurance drone. a 1:5 model of the Wing Loong I – the real drone was shown at the static display area, armed with lightweight weapons. Another model displayed here was the ‘Air Sniper’, while configured to be at the same size and weight class of Wing Loong I, the Air Sniper is capable of flying at higher altitude on longer missions, carrying twice the payload of the Wing Loong I.

The Blue Fox is a high-maneouverability target drone based on AVIC’s L-15 advanced trainer. It is capable of simulating the modern, high manoeuvrability fighters from third generation up. The target drone will be powered by two turbojets, each providing maximum thrust of 60dN.

Another twin-prop is the VD200 vertical take-off and landing drone. As a tail sitter the VD200 takes off and land in vertical position, transitioning to horizontal flight for the rest of the mission. At a 200kg gross take-off weight the VD-200 can carry a payload weighing 20kg on a three hour mission.

A UAV designed for maritime operations from vessels Nimble Loong is a short range UAV operating at low-to-medium altitude (its operation ceiling is 10,000 ft) with an endurance of 6-8 hours. It was developed by the AVIC Chengdu Aircraft Design & Research Institute (CADI). Similar to the Scan Eagle and RQ-21A Blackjack developed for the US Marine Corps, the Nimble-Loong adopts a twin tail boom layout with a pusher propeller, it is launched from a catapult and retrieved by suspended cable arrest. Endurance depends on the propulsion used – a gasoline engine makes 3-4 hours, a heavy fuel diesel would make 6-8 hours.