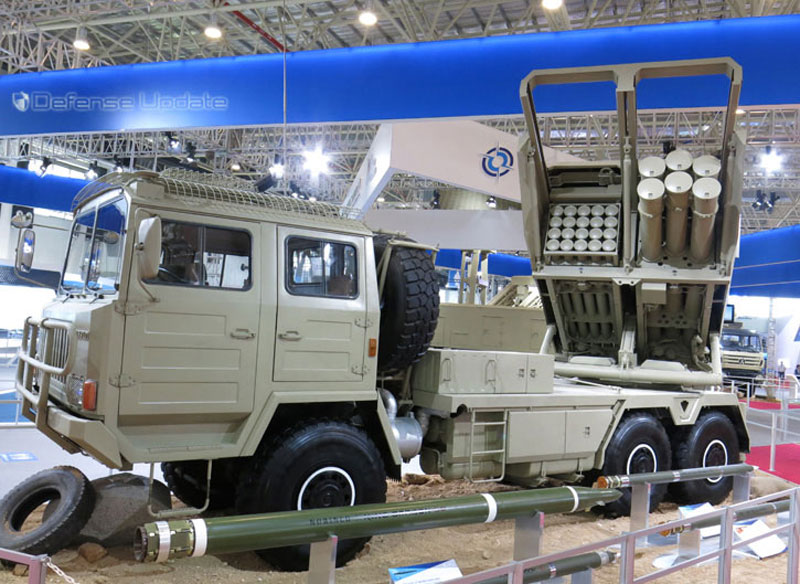 NORINCO unveiled two variants of the King Dragon family of guided rockets, launched from the SR5 multiple rocket launcher. The King Dragon 60(GR1) 220mm laser terminal guided rocket and fire Dragon 40 122mm guided rocket systems. King Dragon provides highly accurate rocket attack using INS/GPS and laser homing guidance. SM5 can carry 12 such rockets. The Fire Dragon 40(BRE) can be employed with NORINCO Type 81, 90B, SR4 and SR5 MLRS, as well as the standard BM-21 (Grad). The guidance method was not mentioned but is assumed to be INS/GPS. To provide the course correction necessary for precision strike the rockets 220mm and 122mm rockets are also provided with pulser or canard controls. To provide precision target acquisition for the rocket unit NORINCO is offering an unarmed rocket carrying reconnaissance systems.

SR5 guided MLRS is a short-medium range universal launching platform designed to deploy several types of rockets in a common launcher. It can carry the 122mm and 220mm guided or unguided rockets including terminal-homing rockets.

WJ-600A/D high altitude and high speed UAV designed for aerial recce and strike. It is equipped with EO and SAR payloads, and carries small air-to-ground precision weapons with a combined weight of 130kg. The drone can loiter at an altitude of 8000 meters for 5 hours, cruising at a speed of 500 – 700 km/h. The WJ-600A/D is launched with a rocket booster and recovered by parachute and airbag.

The CM-510GA is a multi-purpose tactical precision attack missile. The autonomous guided missile that weighs 100 kg is designed to attack point targets at distances of up to 40 km. The heavier CM-501G (150 kg) variant has a range of 70 km and optional ‘cooperative engagement’ capability hinting some type of target updating functions which could consist of laser seeker.

China Aerospace Science and Technology Corp. (CASC) unveiled at Airshow China the B611MR tactical missile system, capable of attacking high value targets from long distances. The missile is launched ballistically to the edge of space, where it continues through a glide and manoeuvring flight in the thin upper atmosphere. When approaching the target the missile dives down to hit its target in a near vertical strike. Navigation is performed by inertial and satellite based system, with sideband, passive radar homing used for terminal guidance. The B611MR is equipped with RF seeker enabling the weapon to strike strategic radar sites.

Two of the missiles designed for the mobile missile transporters displayed by CASIC are the BP-12A and SY-400 guided missiles. Eight SY400 can be carried on a single transporter-launcher. The rockets can be launched in salvo and designed to maximise attack density and simultaneous, multipoint or repeat attack.

The BP-12A missile is designed for tactical attack.

Ballistic (unguided) rockets are used by military forces and terrorists as a statistical weapon that has the potential to cause significant damage to unprotected targets. The trend evident at Airshow China is to shift from standard ballistic rockets to precision guided ones, enabling those weapons to be relevant in a modern battlefield, when available publicly available information such as Google Earth already provides unprecedented accuracy for such ‘point and hit’ attacks.