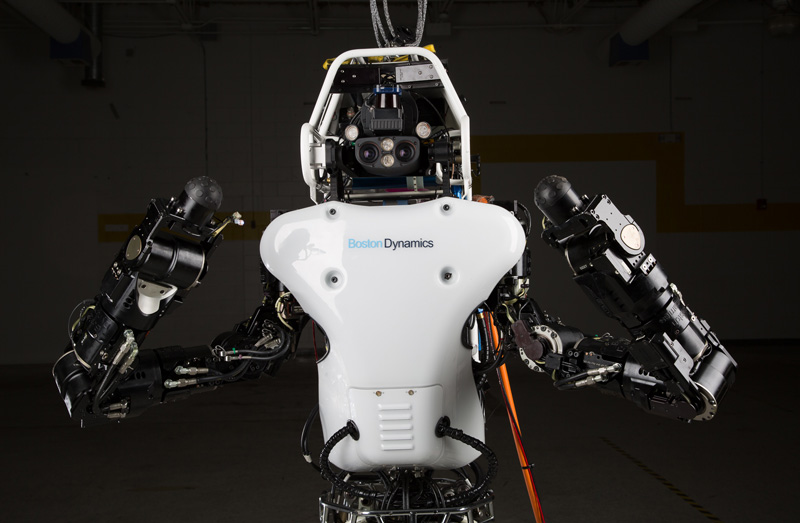 The Atlas humanoid robot will operate under wireless control for the first time at the final event of the DARPA Robotic Challenge (DRC), which will be held June 5-6, 2015 at Fairplex in Pomona, California. DARPA announced yesterday that robots performing at this final phase will have to operate completely free – without power cords, fall arrestors or wired communications tethers. DARPA informed teams they will have to communicate with their robots over a secure wireless network.

Being free doesn’t mean the mission will be easier. As the operating environment at the DRC is designed to mimic a disaster area, robots may encounter unexpected obstacles, debris and unstable surface as well as interference to wireless links. “DARPA will intentionally degrade communications between the robots and human operators working at a distance.” the communique said, “The idea is to replicate the conditions these robots would face going into a disaster zone. Spotty communication will force the robots to make some progress on their own during communications blackouts.”

Movement would also be susceptible to disruption and lack of fall arresting cable means robots may have to recover, without any external intervention. “Teams are not allowed any physical intervention with their robot after it begins a run.” DARPA said, “If a robot falls or gets stuck, it will have to recover and continue with the tasks without any hands-on assistance. If a robot cannot sustain and recover from a fall, its run will end.”

The teams using the DARPA-developed Atlas robot got their first look at the newly upgraded system during a technical shakeout the week of January 12th in Waltham, Mass. The upgraded Atlas is 75 percent new — only the lower legs and feet were carried over from the original design. Lighter materials allowed for inclusion of a battery and a new pump system with only a modest increase in overall weight; the upgraded robot is 6-foot-2 (1.88 meters) and weighs 345 pounds (156.5 kilograms).

Teams are likely to keep their robots connected to fall arrestors during much of the remaining months of training as a safeguard against premature damage to the robot. DARPA demonstrated the new Atlas with a fall arrestor in place. “Risk mitigation is part of the game,” Pratt said. “It’s up to the teams to decide what chances they’re willing to take during training and risk falls and damage, but come the DRC Finals, the cords are cut.”

The most significant changes are to the robot’s power supply and pump. Atlas will now carry an onboard 3.7-kilowatt-hour lithium-ion battery pack, with the potential for one hour of “mixed mission” operation that includes walking, standing, use of tools, and other movements. This will drive a new variable-pressure pump that allows for more efficient operation.

“The introduction of a battery and variable-pressure pump into Atlas poses a strategic challenge for teams,” said Gill Pratt, program manager for the DRC. “The operator will be able to run the robot on a mid-pressure setting for most operations to save power, and then apply bursts of maximum pressure when additional force is needed. The teams are going to have to game out the right balance of force and battery life to complete the course.”

Other major upgrades to Atlas focused on increasing efficiency, dexterity, and resilience, and include:

Seven of the 11 teams competing in the DRC will be using the new ‘Atlas Unplugged’, The teams are scheduled to receive their upgraded robots by the end of this month (January 2015). The robots will be delivered with a “battery emulator,” a training tool temporarily mounted in the robot that simulates how the real battery will perform. This will allow them to switch modes between constant voltage for routine practice and metered voltage to simulate actual battery life.

Given their identical hardware, the Atlas teams will have to differentiate themselves through software, control interfaces, and competition strategy. Teams will have a few options on the selection of tasks they choose to attempt and the order they do them—and must manage time and battery life during their runs—but DARPA expects that the top-placing teams will complete all of the tasks.

“During periodic reviews with the DRC teams we’re already seeing them perform at a much higher level than they were last year. We’re excited to see how much further they can push the technology,” said Pratt. “As any team will tell you, we’re not making it easy. DARPA has been consulting with our international partners to decide on what steps we need to take to speed the development of disaster-response robots, and the DRC Finals will reflect those realities.”

The competing teams have been operating under extreme pressure since the 2013 DRC Trials, working to upgrade their robots and software for the more demanding DRC Finals. In June 2014, DARPA announced a series of additional hurdles that teams will face in the Finals.

A total of $3.5 million in prizes will now be awarded to the top three finishers in the DARPA Robotics Challenge (DRC), the final event of which will be held June 5-6, 2015, at Fairplex in Pomona, Calif. The new prize structure was created in recognition of both the significant progress already demonstrated by teams toward development of human-supervised robot technology for disaster response and the increased number of teams planning to compete in the Finals, including those funded by the European Union and the governments of Japan and South Korea. Aside from the previously announced $2 million grand prize, DARPA plans to award $1 million to the runner-up and $500,000 to the third-place team. DARPA expects at least twenty teams to compete in the DRC Finals.

New teams interested in competing in the DRC have until February 2, 2015, to register and submit qualification materials. DARPA will announce the roster of qualified teams in early March.