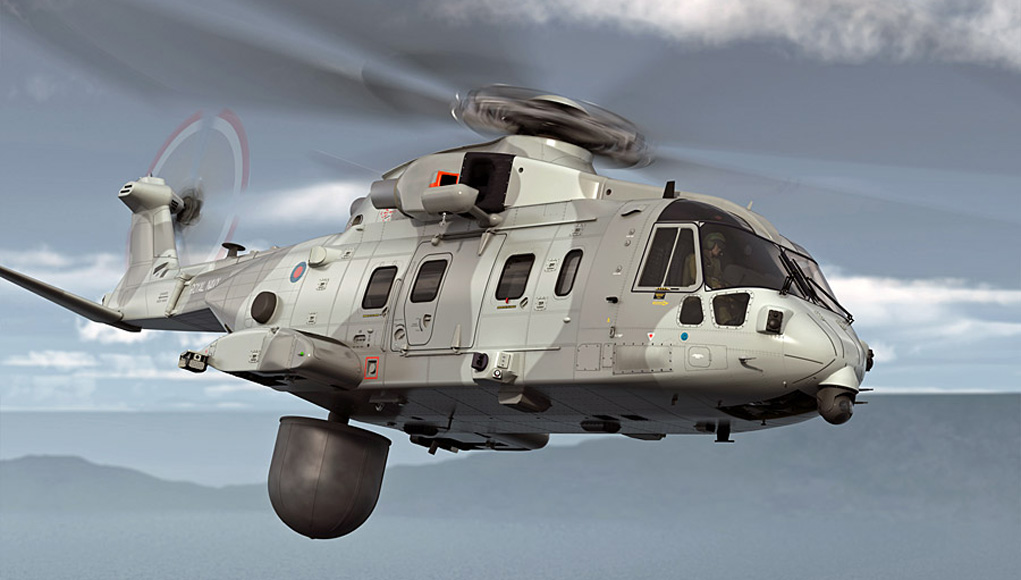 The British MOD is set to select soon the future Airborne Early Warning (AEW) system to be deployed on the future Royal Navy (RN) Queen Elizabeth II aircraft carriers. The Crowsnest airborne surveillance and control (ASaC) program set to become operational in 2019, will providing the Queen Elizabeth Class aircraft carriers an organic air surveillance and battlespace management for the carrier strike force from 2020.

Thales UK and Lockheed Martin submitted final offers for the Crowsnest solutions last month, competing for the £500 million ($761 million) contract. Although the two radar systems proposed by the companies are designed for the Royal Navy AgustaWestland EH101 Merlin Mk 2 ASaC helicopters, they are profoundly different in their mission approach, future capabilities and cost. As part of the U.K. defense ministry’s assessment of the two options, both have been flight tested on a Merlin Mk. 2.

As the Sea King family helicopters is due to retire in 2016, MOD is extending the service of a number of the Sea King helicopters operated by 849 Naval Air Squadron through 2018, to prevent a capability gap between the withdrawal of the Sea King ASaC.7 and the introduction of Merlin ASaC.2. 10 of the Merlin helicopters are to be modified to accept the Airborne Surveillance and Control (ASaC) system, configured as ‘roll on/roll off’ kit.

Leading a £750 million ($1.15 billion) upgrade to 30 of the Royal Navy’s legacy Merlin HM1 helicopters, Lockheed Martin UK has been awarded a £24 million contract to run a competition to design, develop and demonstrate Crowsnest. As the company is also one of the competitors for the tender, the Merlin team has to be ‘firewalled’ to prevent leaking commercially sensitive information to Lockheed Martin UK.

The solution proposed by Thales UK recapitalizes existing the Searchwater 2000 radars currently providing the AEW mission for the Royal Navy on board HMS Ocean. These helicopters carry the mechanically rotating radar in a retractable drum-shaped dome lowered into position below the helicopter after takeoff. Positioned below the fuselage, the rotating radar gains unobstructed view of the hemisphere below, thus covering effectively 360 degrees. Thales plans to utilize this system for the new platform, using a modernized and updated radar along with its associated Cerberus mission system – both are currently used on the Sea King ASaC7.