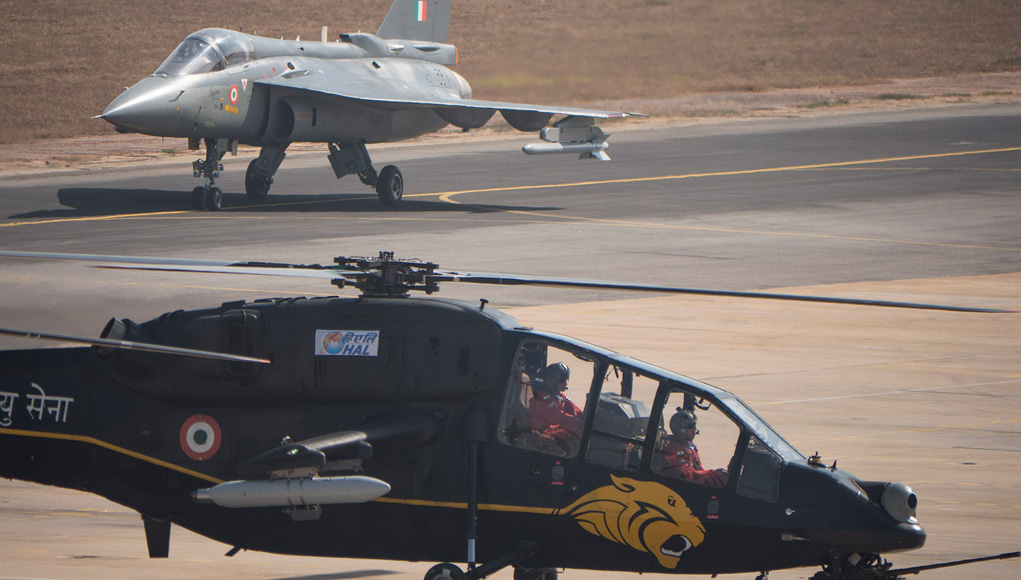 72 aircraft on display here at Aero India 2015 are demonstrating the scope and size this airshow has achieved in its 10th edition. Quite a few of these aircraft are made in India, among them the Indian Tejas (Light Combat Aircraft – LCA), Light Combat Helicopter (LCH Dhruv) – all were developed and manufactured in India by Hindustan Aeronautics (HAL). Other military jets participating in the flying display include the Su-30MKI, now produced in India and the French Rafale. If Dassault and the Indian Government will be able to finalize the contract for the procurement of 126 of the French fighters, the future Aero India airshows will be able to show Indian made Rafales as well.

Airshow is also fun. Six aerobatic teams displaying here are responsible for the fun side of the show – these include the Indian Air Force Sarang, (flying Dhruvs), the Scandinavian Air Show team, Aero Superbatics and Airborne Services from the UK, the Flying Bulls from the Czech Republic and the US Special Forces’ Open Sky Jump Team. The IAF’s fixed-wing aerobatics team, the Surya Kirans, will not perform this year, as it is transitioning from the old HAL Kiran Mark II aircraft to the BAE Hawk advanced jet trainers.

Among the aircraft participating in the static display will be the new airborne early warning variant – Embraer EMB-145I – equipped with a new Indian made airborne radar system developed by the DRDO.

Nearly 600 exhibitors are participating in the 10th Aero India airshow, among them 328 foreign companies and 295 domestic exhibitors – up 50 and 70 percent, compared to 2013. The airshow therefore provides the business arena for foreign executives to gain first impression of potential Indian suppliers and manufacturers from the private sector, an opportunity that is particularly important for their offset requirements. So far, the private sector had managed to gain only a small share of foreign orders as foreign prime contractors sourced local manufacturing opportunities mainly with India’s major Defense Public Sector Units (DPSU) and the largest industrial groups that had the resources and infrastructure to meet foreign standards.

With its 1.5-million strong armed forces grappling with aging equipment, India is set to spend some $120 billion on arms procurement over the next 10 years, thus expected to become the world’s largest defense market outside the USA. India’s need for hundreds of jet fighters, transport and special mission aircraft, over a thousand of military helicopters and unmanned aircraft are attracting the world’s largest defense primes to India.

Organizers are expecting record attendance at this year’s event. Besides 54 ministerial and other high level delegations from 33 countries. Around 300 CEOs from foreign and Indian companies and senior military delegations will attend the show, making this event an excellent business-to-business event. Under the helm of the new defense minister Prime Minister Narendra Modi Aero India has adopted MAKE IN INDIA as its new mantra. Under the new ‘Make’ procedure the Government will invest up to 80 percent of the development cost of new programs, with industry covering 20 percent, for the right to produce those systems in the future. Small and Medium Enterprises (SME) could expect full funding of Research and Development of defense programs under this path. When teaming up with foreign companies and relying on technology transfer, such prospects are likely to becoming increasingly attractive, particularly when compared to past regulations that did not allow foreign enterprises to own more than 25 percent in Indian Joint Ventures (JV).

Changes are also planned in the selection process that sofar favored the lowest bidder as top priority. Future considerations should weigh technology transfer, at least those adding strategic and ‘transformative’ value will also get priority.

Although this mantra signifies a change of wind for the Indian establishment, it is unlikely that the bureaucracy limiting those deals will be resolved at Aero India 2015. However it certainly provides the background for a better future for India’s aerospace and defense industry.

The ‘open for business’ spirit is evident here, with the government nod about the participation of companies that have been blacklisted from doing business in India in the past. One such company is Finmeccanica that is participating in Aero India 2015. Last year its subsidiary AgustaWestland was barred from participating at Defexpo 2014, along with its group companies like Selex, Alenia Aermacchi, Oto Melara and WASS.